Home » Book Reviews » Killing Lincoln
We are a participant in the Amazon Services LLC Associates Program, an affiliate advertising program designed to provide a means for us to earn fees by linking to Amazon.com and affiliated sites. 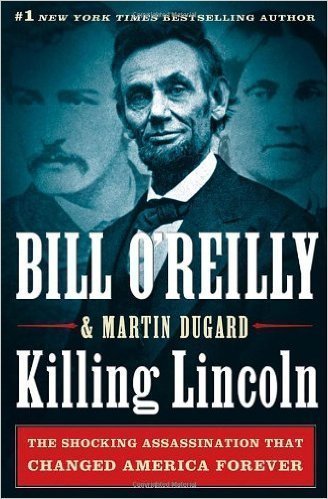 Author: Bill O'Reilly
Genre(s): Biographies  History  Presidential Biographies
Buy the Book Buy the eBook
We are a participant in the Amazon Services LLC Associates Program, an affiliate advertising program designed to provide a means for us to earn fees by linking to Amazon.com and affiliated sites.
Skip to the book review
Publisher Summary:

The anchor of The O’Reilly Factor recounts one of the most dramatic stories in American history―how one gunshot changed the country forever. In the spring of 1865, the bloody saga of America’s Civil War finally comes to an end after a series of increasingly harrowing battles. President Abraham Lincoln’s generous terms for Robert E. Lee’s surrender are devised to fulfill Lincoln’s dream of healing a divided nation, with the former Confederates allowed to reintegrate into American society. But one man and his band of murderous accomplices, perhaps reaching into the highest ranks of the U.S. government, are not appeased.

In the midst of the patriotic celebrations in Washington D.C., John Wilkes Booth―charismatic ladies’ man and impenitent racist―murders Abraham Lincoln at Ford’s Theatre. A furious manhunt ensues and Booth immediately becomes the country’s most wanted fugitive. Lafayette C. Baker, a smart but shifty New York detective and former Union spy, unravels the string of clues leading to Booth, while federal forces track his accomplices. The thrilling chase ends in a fiery shootout and a series of court-ordered executions―including that of the first woman ever executed by the U.S. government, Mary Surratt. Featuring some of history’s most remarkable figures, vivid detail, and page-turning action, Killing Lincoln is history that reads like a thriller.

I found this book well written with a different view on Lincoln and his assassination. He was a motivated man who had a tragic death. There are a few theories about Lincoln and the events that surrounded his death that are pointed out in this book. The book also has some interesting facts about Lincoln, the men and women around him, and the men and maybe even a woman who were behind his murder plot.