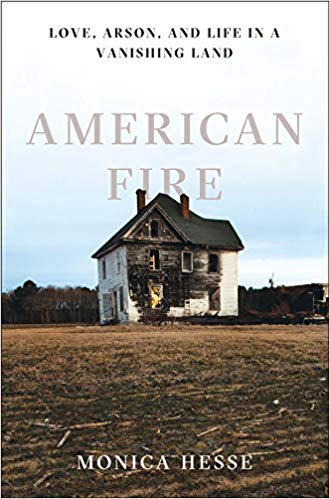 Author: Monica Hesse
Genre(s): American  History  Nonfiction
Buy the Book Buy the eBook
We are a participant in the Amazon Services LLC Associates Program, an affiliate advertising program designed to provide a means for us to earn fees by linking to Amazon.com and affiliated sites.
Skip to the book review
Publisher Summary:

The arsons started on a cold November midnight and didn’t stop for months. Night after night, the people of Accomack County waited to see which building would burn down next, regarding each other at first with compassion, and later suspicion. Vigilante groups sprang up, patrolling the rural Virginia coast with cameras and camouflage. Volunteer firefighters slept at their stations. The arsonist seemed to target abandoned buildings, but local police were stretched too thin to surveil them all. Accomack was desolate―there were hundreds of abandoned buildings. And by the dozen they were burning.

The culprit, and the path that led to these crimes, is a story of twenty-first century America. Washington Post reporter Monica Hesse first drove down to the reeling county to cover a hearing for Charlie Smith, a struggling mechanic who upon his capture had promptly pleaded guilty to sixty-seven counts of arson. But as Charlie’s confession unspooled, it got deeper and weirder. He wasn’t lighting fires alone; his crimes were galvanized by a surprising love story. Over a year of investigating, Hesse uncovered the motives of Charlie and his accomplice, girlfriend Tonya Bundick, a woman of steel-like strength and an inscrutable past. Theirs was a love built on impossibly tight budgets and simple pleasures. They were each other’s inspiration and escape…until they weren’t.

Though it’s hard to believe today, one hundred years ago Accomack was the richest rural county in the nation. Slowly it’s been drained of its industry―agriculture―as well as its wealth and population. In an already remote region, limited employment options offer little in the way of opportunity. A mesmerizing and crucial panorama with nationwide implications, American Fire asks what happens when a community gets left behind. Hesse brings to life the Eastern Shore and its inhabitants, battling a punishing economy and increasingly terrified by a string of fires they could not explain. The result evokes the soul of rural America―a land half gutted before the fires even began.

I can’t say that I loved this book because it was a hard book to read. It is a book about fire and crime in rural Virginia. It gave details about the fire, and what people had to live through. It is about how a close community of people lived in fear of being the next victim. It is about small town life, and it shares the good and the bad about that life. The book is in a way a journalistic type of book, but at the same time it is a page turner that at times I could not put down. If you want to read about a modern day crime story that you probably have never heard about, this is a great read.