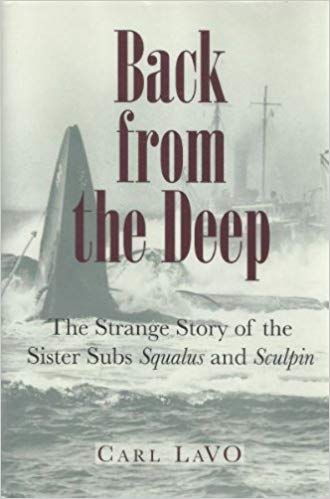 Book Review of
Back from the Deep

Author: Carl Lavo
Genre(s): History  Nonfiction  WWII
Buy the Book Buy the eBook
We are a participant in the Amazon Services LLC Associates Program, an affiliate advertising program designed to provide a means for us to earn fees by linking to Amazon.com and affiliated sites.
Skip to the book review
Publisher Summary:

This epic World War II saga follows the USS Squalus and Sculpin as they play out their dramatic destinies in the Pacific. The author, a seasoned journalist, re-creates their entire perilous journey. The Squalus sank during a test dive in 1939, but thirty-three trapped crewmen were saved thanks to the revolutionary use of the McCann diving bell. The Sculpin’s role in that historic rescue is just the first of many incongruous twists of fate that brought the two subs together after the Squalus was salvaged and rechristened the Sailfish.

Carl LaVO skillfully weaves together the tragic loss of the Sculpin to a Japanese destroyer with the frenetic wrath of its sister sub. Their intertwined fates come to an eerie climax as the Sailfish unleashes a ten-hour attack on the Japanese aircraft carrier Chuyo amid a raging typhoon, unwittingly killing twenty-two of the forty-three Americans captured from the sunken Sculpin. The saga comes to a close with a moving description of the surviving Sculpin crewmen as they face incredible hardship, torture, and disease as POWs in Japan. This book is certain to instill a renewed appreciation for the intrepid men and stealthy boats that were the soul of the Pacific campaign’s silent service.

I liked reading Back from the Deep. It is a very factual book that brings forth the problems and fears of submarines warfare during World War II. It shows how it was a very dangerous job, but how there was a bright side to it like men being able to be saved from sunk submarines.