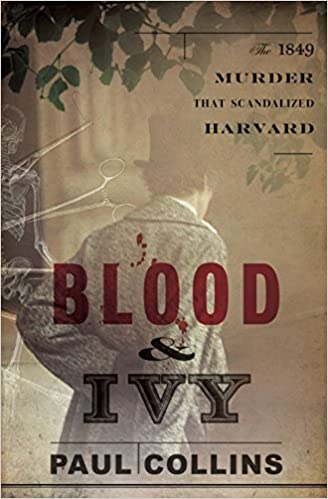 Book Review of
Blood and Ivy

Author: Paul Collins
Genre(s): History  Nonfiction  Science
Buy the Book Buy the eBook
We are a participant in the Amazon Services LLC Associates Program, an affiliate advertising program designed to provide a means for us to earn fees by linking to Amazon.com and affiliated sites.
Skip to the book review
Publisher Summary:

On November 23rd of 1849, in the heart of Boston, one of the city’s richest men simply vanished. Dr. George Parkman, a Brahmin who owned much of Boston’s West End, was last seen that afternoon visiting his alma mater, Harvard Medical School. Police scoured city tenements and the harbor, and offered hefty rewards as leads put the elusive Dr. Parkman at sea or hiding in Manhattan. But one Harvard janitor held a much darker suspicion: that their ruthless benefactor had never left the Medical School building alive.

His shocking discoveries in a chemistry professor’s laboratory engulfed America in one of its most infamous trials: The Commonwealth of Massachusetts v. John White Webster. A baffling case of red herrings, grave robbery, and dismemberment―of Harvard’s greatest doctors investigating one of their own, for a murder hidden in a building full of cadavers―it became a landmark case in the use of medical forensics and the meaning of reasonable doubt. Paul Collins brings nineteenth-century Boston back to life in vivid detail, weaving together newspaper accounts, letters, journals, court transcripts, and memoirs from this groundbreaking case.

Rich in characters and evocative in atmosphere, Blood & Ivy explores the fatal entanglement of new science and old money in one of America’s greatest murder mysteries.

I first saw Blood & Ivy first at Magic City Books and both my dad and I wanted to read it.

This book was so fascinating. I cannot say cool because it is about a murder, but it was so interesting how the police worked and the 1800’s medical system and college worked. If you have read some of the other medical books or true crime, this will be one to check out.

Harvard and murder was nothing I had heard about together before, but even Dickinson was interested in it.

I found it well written. I read most of it in doctor’s office waiting rooms. It kept me distracted and I recommend it to my dad once I finished.