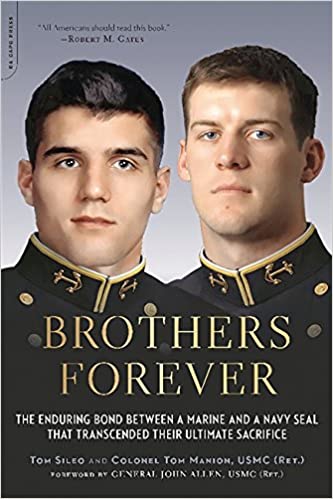 Author: Tom Sileo and Colonel Tom Manion
Genre(s): History  Military  Nonfiction
Buy the Book Buy the eBook
We are a participant in the Amazon Services LLC Associates Program, an affiliate advertising program designed to provide a means for us to earn fees by linking to Amazon.com and affiliated sites.
Skip to the book review
Publisher Summary:

Four weeks after Navy SEALs had killed Osama bin Laden, the President of the United States stood in Arlington National Cemetery. In his Memorial Day address, he extolled the courage and sacrifice of the two young men buried side by side in the graves before him: Travis Manion, a fallen US Marine, and Brendan Looney, a fallen US Navy SEAL. Although they were killed three years apart, one in Iraq and one in Afghanistan, these two best friends and former roommates were now buried together–“brothers forever.”

Award-winning journalist Tom Sileo and Travis’s father, former Marine colonel Tom Manion, come together to tell thisd intimate story, from Travis’s incredible heroism on the streets of Fallujah to Brendan’s anguished Navy SEAL training in the wake of his friend’s death and his own heroism in the mountains of Afghanistan. Brothers Forever is a remarkable story of friendship, family, and war.

Brothers Forever was such a touching story. It was heartbreaking because both the men that are followed in the book die, which isn’t too much of a spoiler as that is on the cover of the book.

They were not really brothers, but they went to the Naval academy. That was where they bonded.

They both had a passion to serve their country.

It is a worthy story to be told and read. It is a modern military story and a little all over the place. But it is easier to pick it up and put it down, which I found helpful as I read it during school.

If you are looking for a touching true modern war story, this will grab your heart.