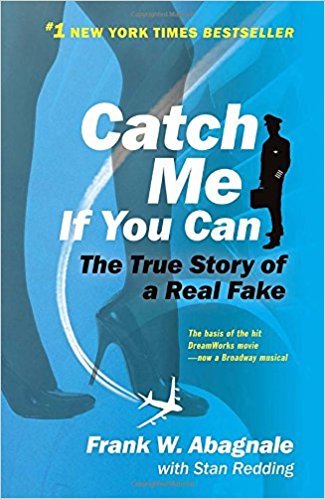 Book Review of
Catch Me If You Can

Author: Frank W. Abagnale
Genre(s): Biographies & Memoirs  Memoirs  Nonfiction
Buy the Book Buy the eBook
We are a participant in the Amazon Services LLC Associates Program, an affiliate advertising program designed to provide a means for us to earn fees by linking to Amazon.com and affiliated sites.
Skip to the book review
Publisher Summary:

Frank W. Abagnale, alias Frank Williams, Robert Conrad, Frank Adams, and Robert Monjo, was one of the most daring con men, forgers, imposters, and escape artists in history. In his brief but notorious criminal career, Abagnale donned a pilot’s uniform and copiloted a Pan Am jet, masqueraded as the supervising resident of a hospital, practiced law without a license, passed himself off as a college sociology professor, and cashed over $2.5 million in forged checks, all before he was twenty-one.

Known by the police of twenty-six foreign countries and all fifty states as “The Skywayman,” Abagnale lived a sumptuous life on the lam–until the law caught up with him. Now recognized as the nation’s leading authority on financial foul play, Abagnale is a charming rogue whose hilarious, stranger-than-fiction international escapades, and ingenious escapes-including one from an airplane-make Catch Me If You Can an irresistible tale of deceit.

Catch Me If You Can is a fun read. It was very hard for me to put down when I got into it. I laughed sometimes and was rather shocked other times. It is unimaginable what Frank Abagnale got away with on his crime spree. I really liked how it was written and I feel like I know a lot more about crime now. I highly recommend this book for people who enjoy memoirs and interesting stories.