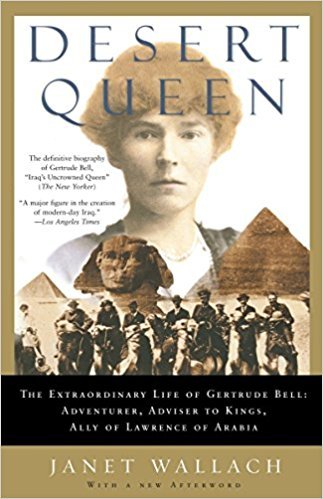 Author: Janet Wallach
Genre(s): Biographies  Biographies & Memoirs  History  Nonfiction
Buy the Book Buy the eBook
We are a participant in the Amazon Services LLC Associates Program, an affiliate advertising program designed to provide a means for us to earn fees by linking to Amazon.com and affiliated sites.
Skip to the book review
Publisher Summary:

Here is the story of Gertrude Bell, who explored, mapped, and excavated the Arab world throughout the early twentieth century. Recruited by British intelligence during World War I, she played a crucial role in obtaining the loyalty of Arab leaders, and her connections and information provided the brains to match T. E. Lawrence’s brawn. After the war, she played a major role in creating the modern Middle East and was, at the time, considered the most powerful woman in the British Empire.

In this masterful biography, Janet Wallach shows us the woman behind these achievements–a woman whose passion and defiant independence were at odds with the confined and custom-bound England she left behind. Too long eclipsed by Lawrence, Gertrude Bell emerges at last in her own right as a vital player on the stage of modern history, and as a woman whose life was both a heartbreaking story and a grand adventure.

Desert Queen is a slow but interesting read. I knew nothing about Gertrude Bell until I picked up this book, and now I am very glad I know about her. She was a very independent woman that helped the shape the Middle East. This book teaches a ton about history.

It focuses on the Middle East (Iraq, Egypt, Syria, and such), but covers some of England’s, India’s, and other areas history. It also talked a little bit about WWI, which I always find fascinating because there is so little about it. I think if you want to learn about odd history facts that this is a great book for you. I would say that it is a slower read, but I found it easy to pick up and put down because of all the breaks in it. But I did get a lot of people mixed, there were so many names.