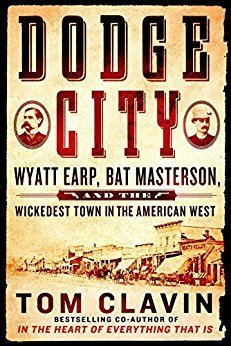 Author: Tom Clavin
Genre(s): American  Biographies  Biographies & Memoirs  History  Nonfiction
Buy the Book Buy the eBook
We are a participant in the Amazon Services LLC Associates Program, an affiliate advertising program designed to provide a means for us to earn fees by linking to Amazon.com and affiliated sites.
Skip to the book review
Publisher Summary:

Dodge City, Kansas, is a place of legend. The town that started as a small military site exploded with the coming of the railroad, cattle drives, eager miners, settlers, and various entrepreneurs passing through to populate the expanding West. Before long, Dodge City’s streets were lined with saloons and brothels and its populace was thick with gunmen, horse thieves, and desperadoes of every sort. By the 1870s, Dodge City was known as the most violent and turbulent town in the West.

Enter Wyatt Earp and Bat Masterson. Young and largely self-trained men, the lawmen led the effort that established frontier justice and the rule of law in the American West, and did it in the wickedest place in the United States. When they moved on, Wyatt to Tombstone and Bat to Colorado, a tamed Dodge was left in the hands of Jim Masterson. But before long Wyatt and Bat, each having had a lawman brother killed, returned to that threatened western Kansas town to team up to restore order again in what became known as the Dodge City War before riding off into the sunset.

This was a good read on the history of the West. It was a bit of a slow read to me, but I enjoyed it overall. Woman and brothels were mentioned. This book is great especially if you want to know more about the old west and the people who lived during that time period.