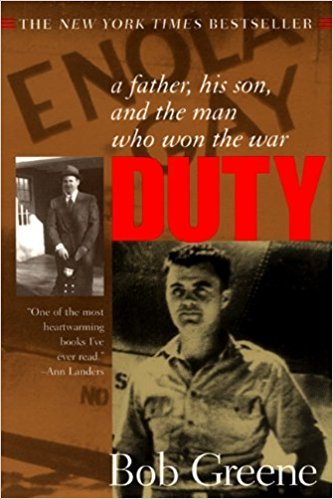 Author: Bob Greene
Genre(s): Biographies & Memoirs  History  Nonfiction  WWII
Buy the Book Buy the eBook
We are a participant in the Amazon Services LLC Associates Program, an affiliate advertising program designed to provide a means for us to earn fees by linking to Amazon.com and affiliated sites.
Skip to the book review
Publisher Summary:

When Bob Greene went home to central Ohio to be with his dying father, it set off a chain of events that led him to knowing his dad in a way he never had before—thanks to a quiet man who lived just a few miles away, a man who had changed the history of the world.

Greene’s father—a soldier with an infantry division in World War II—often spoke of seeing the man around town. All but anonymous even in his own city, carefully maintaining his privacy, this man, Greene’s father would point out to him, had “won the war.” He was Paul Tibbets. At the age of twenty-nine, at the request of his country, Tibbets assembled a secret team of 1,800 American soldiers to carry out the single most violent act in the history of mankind. In 1945 Tibbets piloted a plane—which he called Enola Gay, after his mother—to the Japanese city of Hiroshima, where he dropped the atomic bomb.

On the morning after the last meal he ever ate with his father, Greene went to meet Tibbets. What developed was an unlikely friendship that allowed Greene to discover things about his father, and his father’s generation of soldiers, that he never fully understood before.

Duty is the story of three lives connected by history, proximity, and blood; indeed, it is many stories, intimate and achingly personal as well as deeply historic. In one soldier’s memory of a mission that transformed the world—and in a son’s last attempt to grasp his father’s ingrained sense of honor and duty—lies a powerful tribute to the ordinary heroes of an extraordinary time in American life.

This book was very fascinating and I learned a lot that I did not know about World War II. This book is writing from a different perspective and I enjoyed because of that. I did find it a little confusing at times when it jumped from past and present, but I did get use to it by the end. This is defiantly worth reading if the reader wants to learn more about World War II and the men who fought for our freedom.