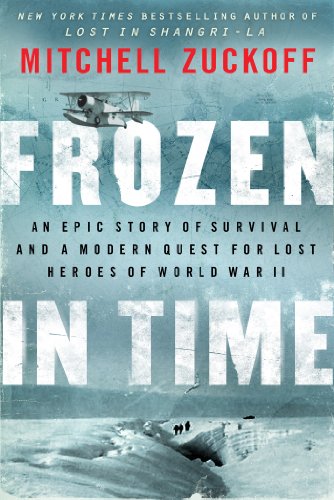 Book Review of
Frozen In Time

Author: Mitchell Zuckoff
Genre(s): History  WWII
Buy the Book Buy the eBook
We are a participant in the Amazon Services LLC Associates Program, an affiliate advertising program designed to provide a means for us to earn fees by linking to Amazon.com and affiliated sites.
Skip to the book review
Publisher Summary:

Frozen in Time is a gripping true story of survival, bravery, and honor in the vast Arctic wilderness during World War II, from the author of New York Times bestseller Lost in Shangri-La.

On November 5, 1942, a US cargo plane slammed into the Greenland Ice Cap. Four days later, the B-17 assigned to the search-and-rescue mission became lost in a blinding storm and also crashed. Miraculously, all nine men on board survived, and the US military launched a daring rescue operation. But after picking up one man, the Grumman Duck amphibious plane flew into a severe storm and vanished.

Frozen in Time tells the story of these crashes and the fate of the survivors, bringing vividly to life their battle to endure 148 days of the brutal Arctic winter, until an expedition headed by famed Arctic explorer Bernt Balchen brought them to safety. Mitchell Zuckoff takes the reader deep into the most hostile environment on earth, through hurricane-force winds, vicious blizzards, and subzero temperatures.

This is a World War II story that is hardly ever talked about, the war in Greenland. One of the Allies greatest fears was that Germany would take Greenland. This large island was used to predict what the weather would be in Europe and who ever controlled Greenland would know what the weather in Europe would be like. While the name might be slightly deceiving, this cold, icy land was treacherous to pilots as they flew around Greenland. This became a problem for the crew of the C-53 and its rescuers. This book contains military language, some death scenes, and wounded men. I found the story a little slow going, but interesting as it discussed a different view on World War II.