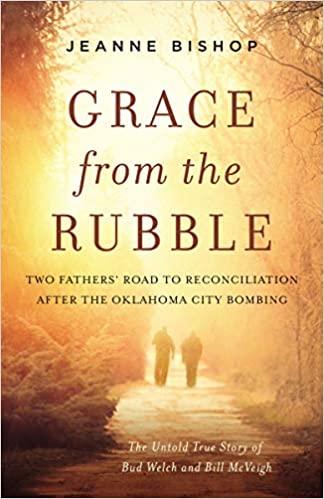 Book Review of
Grace from the Rubble

Author: Jeanne Bishop
Genre(s): American  History  Nonfiction
Buy the Book Buy the eBook
We are a participant in the Amazon Services LLC Associates Program, an affiliate advertising program designed to provide a means for us to earn fees by linking to Amazon.com and affiliated sites.
Skip to the book review
Publisher Summary:

The heart-stirring story of how the father of a young woman killed in the Oklahoma City bombing and the father of her killer, Timothy McVeigh, forged an unlikely friendship and found forgiveness.

In what was to become the deadliest attack on American soil since Pearl Harbor, the Oklahoma City bombing was one in a long line of violent attacks that have left communities across the nation searching for healing and hope. With the soaring message of the power of love to conquer evil, Grace from the Rubble tells the intertwining stories of four captivating individuals: Julie Welch, a young professional full of promise, and Tim McVeigh, the troubled mind behind the horrific event; Bud Welch, a father whose only daughter (Julie) was murdered, and Bill McVeigh, the father of her killer.

With searing details by first-hand witnesses, including the Governor of Oklahoma, masterful storyteller Jeanne Bishop describes the suspenseful scenes leading up to that fateful day and the dramatic events afterward as one father buried his daughter and the other saw his only son arrested and tried for mass murder.

Vivid and haunting, this true story is rich with memories and beautiful descriptions of the nation’s heartland, a place of grit and love for neighbors and family. Bishop tells how murder affected her own family and led her to meet Bud and, ultimately, how she learned to see humanity amidst inhuman violence.

With compassion for all who have been touched by tragedy, this poignant narrative will touch your heart with the astonishing forgiveness that led to an extraordinary friendship.

Grace from the Rubble was a good, but tough read for me. I have lived in Oklahoma since 1994. My husband and I lived in the Oklahoma City area when the bombing happened. My husband was close enough that he felt the blast when it went off. I am going to do a full review of Grace from the Rubble in a few weeks. But I am glad I read this one. While I don’t agree with everything in this book, and I think the writing could have been better, it is such an important read. This book focuses not just on the destruction, but on love and forgiveness.