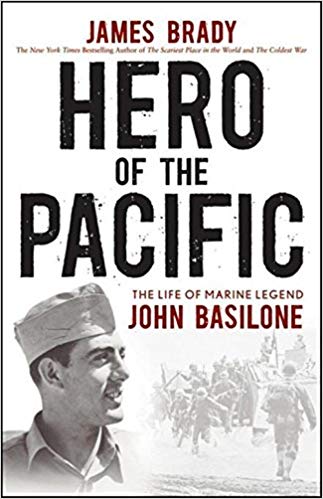 Book Review of
Hero of the Pacific

Author: James Brady
Genre(s): Biographies  Biographies & Memoirs  History  Nonfiction  WWII
Buy the Book Buy the eBook
We are a participant in the Amazon Services LLC Associates Program, an affiliate advertising program designed to provide a means for us to earn fees by linking to Amazon.com and affiliated sites.
Skip to the book review
Publisher Summary:

Gunnery Sergeant John Basilone was a Marine legend who received the Medal of Honor for holding off 3,000 Japanese on Guadalcanal and the Navy Cross posthumously for his bravery on Iwo Jima. This is the story of how a young man from Raritan, New Jersey, became one of America’s biggest World War II heroes.

Profiles one of three main characters in HBO’s The Pacific, the successful sequel to the popular mini-series Band of Brothers

Sorts through the differing accounts of Basilone’s life and exploits, including what he did on Iwo Jima and how he died
The final book by James Brady, the Korean War veteran and well-known columnist and author of books that include Why Marines Fight and an autobiography, The Coldest War, a Pulitzer Prize finalist

An incredible story masterfully told, Hero of the Pacific will appeal to anyone with an interest in World War II and military history as well as fans of HBO’s The Pacific.

I read Hero of the Pacific after reading Voices of the Pacific. Sergeant John Basilone has a very interesting story. It is a sad story, but it was good to read and remember the brave men in the war. It also a good reminder that in history there are often disagreeing opinions. I will say though that it was not the best written World War II biography that I have read. At times it didn’t flow really well, but if you like reading about the World War II Pacific war, I think you will enjoy this one.