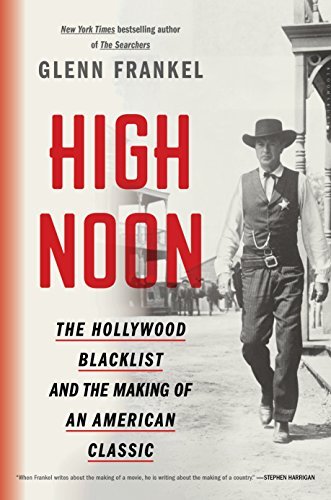 Author: Glenn Frankel
Genre(s): History  Hollywood  Nonfiction
Buy the Book Buy the eBook
We are a participant in the Amazon Services LLC Associates Program, an affiliate advertising program designed to provide a means for us to earn fees by linking to Amazon.com and affiliated sites.
Skip to the book review
Publisher Summary:

It’s one of the most revered movies of Hollywood’s golden era. Starring screen legend Gary Cooper and Grace Kelly in her first significant film role, High Noon was shot on a lean budget over just thirty-two days but achieved instant box-office and critical success. It won four Academy Awards in 1953, including a best actor win for Cooper. And it became a cultural touchstone, often cited by politicians as a favorite film, celebrating moral fortitude.

Yet what has been often overlooked is that High Noon was made during the height of the Hollywood blacklist, a time of political inquisition and personal betrayal. In the middle of the film shoot, screenwriter Carl Foreman was forced to testify before the House Committee on Un-American Activities about his former membership in the Communist Party. Refusing to name names, he was eventually blacklisted and fled the United States. (His co-authored screenplay for another classic, The Bridge on the River Kwai, went uncredited in 1957.) Examined in light of Foreman’s testimony, High Noon‘s emphasis on courage and loyalty takes on deeper meaning and importance.

In this book, Pulitzer Prize-winning journalist Glenn Frankel tells the story of the making of a great American Western, exploring how Carl Foreman’s concept of High Noon evolved from idea to first draft to final script, taking on allegorical weight. Both the classic film and its turbulent political times emerge newly illuminated.

I love the movie High Noon. It is a classic that helped make the anti western western movies into Hollywood. So when I saw this book, I really wanted to read it. And in the end, I was not disappointed. There was a mix of scandal, the old west, actors, and more, which made this book tasteful.

I learned so much about Hollywood and how what was going on at the time the movie was released was what made it more impactful on its audience. It also showed me the behind the scenes and how budgets work. High Noon was not supposed to be a hit movie. It was made quickly compared to most movies, especially today. If you like reading about Hollywood, enjoy western, or love this movie, I would check this book out.