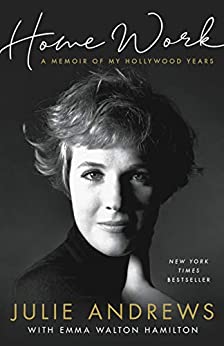 Author: Julie Andrews
Genre(s): Biographies & Memoirs  Hollywood  Memoirs
Buy the Book Buy the eBook
We are a participant in the Amazon Services LLC Associates Program, an affiliate advertising program designed to provide a means for us to earn fees by linking to Amazon.com and affiliated sites.
Skip to the book review
Publisher Summary:

In Home, the number one New York Times international bestseller, Julie Andrews recounted her difficult childhood and her emergence as an acclaimed singer and performer on the stage.
With this second memoir, Home Work: A Memoir of My Hollywood Years, Andrews picks up the story with her arrival in Hollywood and her phenomenal rise to fame in her earliest films — >Mary Poppins and The Sound of Music. Andrews describes her years in the film industry — from the incredible highs to the challenging lows. Not only does she discuss her work in now-classic films and her collaborations with giants of cinema and television, she also unveils her personal story of adjusting to a new and often daunting world, dealing with the demands of unimaginable success, being a new mother, the end of her first marriage, embracing two stepchildren, adopting two more children, and falling in love with the brilliant and mercurial Blake Edwards. The pair worked together in numerous films, including Victor/Victoria, the gender-bending comedy that garnered multiple Oscar nominations.

Cowritten with her daughter, Emma Walton Hamilton, and told with Andrews’s trademark charm and candor, Home Work takes us on a rare and intimate journey into an extraordinary life that is funny, heartrending, and inspiring.

I listened to Home Work: A Memoir of My Hollywood Years by Julie Andrews on audiobook. I mentioned earlier this year that I enjoy listening to celebrity memoirs on audio. That is mainly because actors and most celebrities read their own books and with all of their training, they are usually great readers.

The problem is that there are not a lot of celebrity books that I want to read or listen to. In the course of looking for celebrity memoirs on audiobooks, I came across two books by Julie Andrew. Home, which is about Julia Andrew’s childhood and early years, and Home Work which is about her years in acting and Hollywood.

I decided to start with her years in Hollywood book. Overall, I enjoyed this book. Julie Andrews reading it to you made it easy listening most of the time.

It was fascinated to learn the behind the scenes information about Mary Poppins and the Sound of Music. Hearing her talk about what it was like to film those movies made me want to go back and rewatch them.

The book was also an interesting look at the not so glamorous life of an actress. There is a lot that goes into it that the average person has no clue about. I found all of that interesting.

I will say that the book felt long and too details in some parts. Julie Andres obviously wrote a lot in her diaries and journals. I don’t think she could have written this book if she hadn’t, but I didn’t need to know all the details. The middle of the book seemed like too much information, especially with some of her marriage issues, issues with kids, etc.

Overall though I enjoyed the book and learned a lot about Julie Andrews and Hollywood. I had no idea that she starred in so many films and t.v. shows. I will probably go back and listen to her book on her early years.

And one other note is that this one covers a lot of mature topics so I wouldn’t listen to it with young kids around unless you want to do a lot of explaining.