Home » Book Reviews » Hotel On the Corner of Bitter and Sweet
We are a participant in the Amazon Services LLC Associates Program, an affiliate advertising program designed to provide a means for us to earn fees by linking to Amazon.com and affiliated sites. 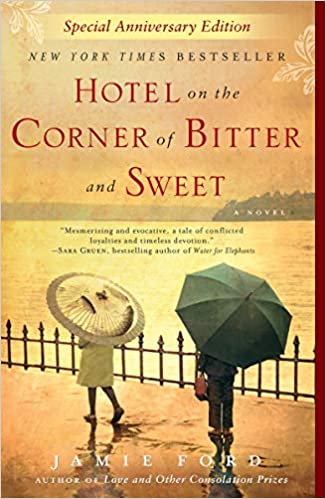 Book Review of
Hotel On the Corner of Bitter and Sweet

Author: Jamie Ford
Genre(s): Fiction  WWII
Buy the Book Buy the eBook
We are a participant in the Amazon Services LLC Associates Program, an affiliate advertising program designed to provide a means for us to earn fees by linking to Amazon.com and affiliated sites.
Skip to the book review
Publisher Summary:

In the opening pages of Jamie Ford’s stunning debut novel, Hotel on the Corner of Bitter and Sweet, Henry Lee comes upon a crowd gathered outside the Panama Hotel, once the gateway to Seattle’s Japantown. It has been boarded up for decades, but now the new owner has made an incredible discovery: the belongings of Japanese families, left when they were rounded up and sent to internment camps during World War II. As Henry looks on, the owner opens a Japanese parasol.

This simple act takes old Henry Lee back to the 1940s, at the height of the war, when young Henry’s world is a jumble of confusion and excitement, and to his father, who is obsessed with the war in China and having Henry grow up American. While “scholarshipping” at the exclusive Rainier Elementary, where the white kids ignore him, Henry meets Keiko Okabe, a young Japanese American student. Amid the chaos of blackouts, curfews, and FBI raids, Henry and Keiko forge a bond of friendship–and innocent love–that transcends the long-standing prejudices of their Old World ancestors. And after Keiko and her family are swept up in the evacuations to the internment camps, she and Henry are left only with the hope that the war will end, and that their promise to each other will be kept.

Forty years later, Henry Lee is certain that the parasol belonged to Keiko. In the hotel’s dark dusty basement he begins looking for signs of the Okabe family’s belongings and for a long-lost object whose value he cannot begin to measure. Now a widower, Henry is still trying to find his voice–words that might explain the actions of his nationalistic father; words that might bridge the gap between him and his modern, Chinese American son; words that might help him confront the choices he made many years ago.

Set during one of the most conflicted and volatile times in American history, Hotel on the Corner of Bitter and Sweet is an extraordinary story of commitment and enduring hope. In Henry and Keiko, Jamie Ford has created an unforgettable duo whose story teaches us of the power of forgiveness and the human heart.

I have had a copy of Hotel On the Corner of Bitter and Sweet on my Kindle for years. It wasn’t until I wanted to read more books about Japanese internment Camps during WWII that I decided to finally read it.

This book is a work of fiction, but it was based on a real event in American history. I am picky when it comes to historical fiction. I didn’t think I would like this book, but I ended up loving it. It is now on my list of all-time favorite WWII historical fiction.

It is about love, family, loyalty, friendship, and more. It is a dual timeline story that takes place in Seattle, WA, during the 1940s and the 1980s.

The story and the characters were so well written. A lot of fiction seems unbelievable, but this book read like it really could have happened.