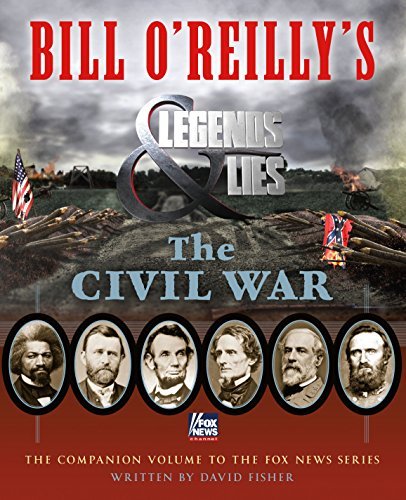 Book Review of
Legends and Lies: The Civil War

Author: David Fisher
Genre(s): American  Biographies  Biographies & Memoirs  History  Nonfiction
Buy the Book Buy the eBook
We are a participant in the Amazon Services LLC Associates Program, an affiliate advertising program designed to provide a means for us to earn fees by linking to Amazon.com and affiliated sites.
Skip to the book review
Publisher Summary:

From the birth of the Republican Party to the Confederacy’s first convention, the Underground Railroad to the Emancipation Proclamation, the Battle of Gettysburg to the assassination of Abraham Lincoln, Bill O’Reilly’s Legends and Lies: The Civil War reveals the amazing and often little known stories behind the battle lines of America’s bloodiest war and debunks the myths that surround its greatest figures, including Harriet Tubman, Abraham Lincoln, General Robert E. Lee, Frederick Douglass, Stonewall Jackson, John Singleton Mosby, Ulysses S. Grant, Jefferson Davis, John Wilkes Booth, William Tecumseh Sherman, and more. An epic struggle between the past and future, the Civil War sought to fulfill the promise that “all men are created equal.” It freed an enslaved race, decimated a generation of young men, ushered in a new era of brutality in war, and created modern America. Featuring archival images, eyewitness accounts, and beautiful artwork that further brings the history to life, The Civil War is the action-packed and ultimate follow-up to the #1 bestsellers The Patriots and The Real West.

I found some interesting facts in this book. I already knew most of what the book talked about. This book would be a great read for someone who wants to learn a bunch of odd facts about the Civil War and the people involved.