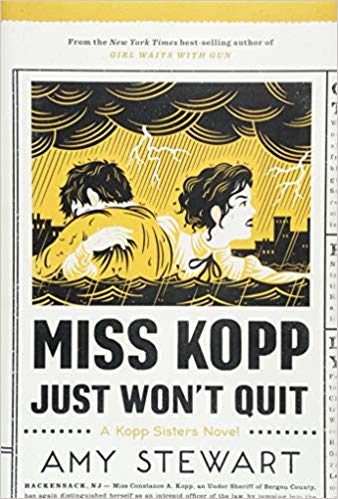 Author: Amy Stewart
Genre(s): Fiction  General Fiction  Historical Fiction
Buy the Book Buy the eBook
We are a participant in the Amazon Services LLC Associates Program, an affiliate advertising program designed to provide a means for us to earn fees by linking to Amazon.com and affiliated sites.
Skip to the book review
Publisher Summary:

After a year on the job, New Jersey’s first female deputy sheriff has collared criminals, demanded justice for wronged women, and gained notoriety nationwide for her exploits. But on one stormy night, everything falls apart.

While transporting a woman to an insane asylum, Deputy Kopp discovers something deeply troubling about her story. Before she can investigate, another inmate bound for the asylum breaks free and tries to escape.

In both cases, Constance runs instinctively toward justice. But the fall of 1916 is a high-stakes election year, and any move she makes could jeopardize Sheriff Heath’s future—and her own. Although Constance is not on the ballot, her controversial career makes her the target of political attacks.

With wit and verve, book-club favorite Amy Stewart brilliantly conjures the life and times of the real Constance Kopp to give us this “unforgettable, not-to-be messed-with heroine” (Marie Claire) under fire in Miss Kopp Just Won’t Quit.

Miss Kopp Won’t Quit by Amy Stewart is the fourth book in the Kopp Sister’s series. I have read all of the books in this series and really enjoyed them. The first two books in the series were probably my favorite, but I have enjoyed them all. They are quick and easy reads. These books would make a great read for teens because they are clean mystery books without a lot of gory details or sexual content. Both Grace and I enjoy this series.