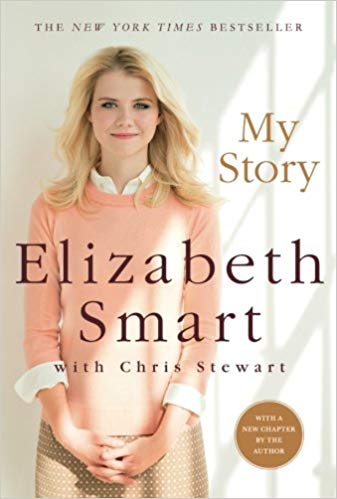 Book Review of
My Story

Author: Elizabeth Smart
Genre(s): Biographies & Memoirs  Nonfiction
Buy the Book Buy the eBook
We are a participant in the Amazon Services LLC Associates Program, an affiliate advertising program designed to provide a means for us to earn fees by linking to Amazon.com and affiliated sites.
Skip to the book review
Publisher Summary:

In this memoir, Elizabeth Smart reveals how she survived and the secret to forging a new life in the wake of a brutal crime. On June 5, 2002, fourteen-year-old Elizabeth Smart, the daughter of a close-knit Mormon family, was taken from her home in the middle of the night by religious fanatic Brian David Mitchell and his wife, Wanda Barzee. Elizabeth was kept chained, dressed in disguise, repeatedly raped, and told she and her family would be killed if she tried to escape. After her rescue on March 12, 2003, she rejoined her family and worked to pick up the pieces of her life.

With My Story, Elizabeth tells of the constant fear she endured every hour, her courageous determination to maintain hope, and how she devised a plan to manipulate her captors and convinced them to return to Utah, where she was rescued minutes after arriving. Smart explains how her faith helped her stay sane in the midst of a nightmare and how she found the strength to confront her captors at their trial and see that justice was served.

In the years after her rescue, Smart transformed from victim to advocate, traveling the country and working to educate, inspire and foster change. She has created a foundation to help prevent crimes against children and is a frequent public speaker. She and her husband, Matthew Gilmour, now have two children.

It is hard to say that I enjoyed the book My Story by Elizabeth Smart because it is such a tough read. I read this as my Utah book for my nonfiction about every state challenge. I was having trouble coming up with a book for Utah, and I saw this ebook on sale. I decided that it would be a good book for Utah since it was such a riveting story when it happened. I am glad I read this book. It is a powerful story of not giving up and about forgiveness. If you remember the headlines and news stories about Elizabeth Smart and have wondered more about the story, you might enjoy this book.