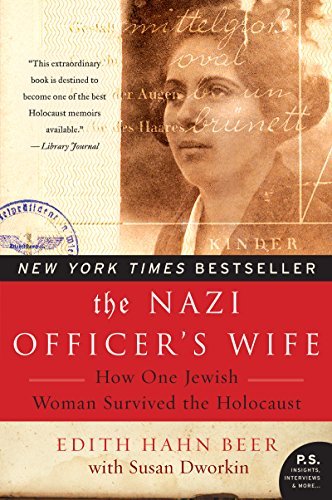 Author: Edith H. Beer
Genre(s): Biographies & Memoirs  Christian Nonfiction  History  Nonfiction  WWII
Buy the Book Buy the eBook
We are a participant in the Amazon Services LLC Associates Program, an affiliate advertising program designed to provide a means for us to earn fees by linking to Amazon.com and affiliated sites.
Skip to the book review
Publisher Summary:

Edith Hahn was an outspoken young woman in Vienna when the Gestapo forced her into a ghetto and then into a slave labor camp. When she returned home months later, she knew she would become a hunted woman and went underground. With the help of a Christian friend, she emerged in Munich as Grete Denner. There she met Werner Vetter, a Nazi Party member who fell in love with her. Despite Edith’s protests and even her eventual confession that she was Jewish, he married her and kept her identity a secret.

In wrenching detail, Edith recalls a life of constant, almost paralyzing fear. She tells how German officials casually questioned the lineage of her parents; how during childbirth she refused all painkillers, afraid that in an altered state of mind she might reveal something of her past; and how, after her husband was captured by the Soviets, she was bombed out of her house and had to hide while drunken Russian soldiers raped women on the street.

Despite the risk it posed to her life, Edith created a remarkable record of survival. She saved every document, as well as photographs she took inside labor camps. Now part of the permanent collection at the Holocaust Memorial Museum in Washington, D.C., these hundreds of documents, several of which are included in this volume, form the fabric of a gripping new chapter in the history of the Holocaust—complex, troubling, and ultimately triumphant.