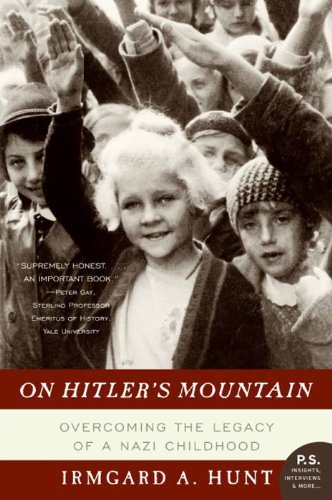 Book Review of
On Hitler’s Mountain

Author: Irmgard Hunt
Genre(s): Biographies & Memoirs  History  Memoirs  Nonfiction  WWII
Buy the Book Buy the eBook
We are a participant in the Amazon Services LLC Associates Program, an affiliate advertising program designed to provide a means for us to earn fees by linking to Amazon.com and affiliated sites.
Skip to the book review
Publisher Summary:

Growing up in the beautiful mountains of Berchtesgaden — just steps from Adolf Hitler’s alpine retreat — Irmgard Hunt had a seemingly happy, simple childhood. In her powerful, illuminating, and sometimes frightening memoir, Hunt recounts a youth lived under an evil but persuasive leader. As she grew older, the harsh reality of war — and a few brave adults who opposed the Nazi regime — aroused in her skepticism of National Socialist ideology and the Nazi propaganda she was taught to believe in.

In May 1945, an eleven-year-old Hunt watched American troops occupy Hitler’s mountain retreat, signaling the end of the Nazi dictatorship and World War II. As the Nazi crimes began to be accounted for, many Germans tried to deny the truth of what had occurred; Hunt, in contrast, was determined to know and face the facts of her country’s criminal past.

On Hitler’s Mountain is more than a memoir — it is a portrait of a nation that lost its moral compass. It is a provocative story of a family and a community in a period and location in history that, though it is fast becoming remote to us, has important resonance for our own time.

I picked this book up at a used bookstore because the description caught my eye. I love learning about different aspects of a certain event and this a totally different aspect of World War II. This is about a girl who grew up in Hitler’s Germany. She talks about her families disagreements on Hitler and the memories she has of her childhood. This book does discuss things that she remembers growing up which includes girl things that her and her best friend talked about. Her mother also had abortion(s) and they also talk about rape after Germany was invaded. Overall it was a good book that I am glad I read.