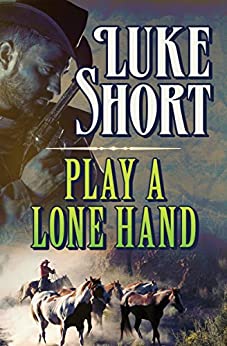 Author: Luke Short
Genre(s): Fiction  Westerns
Buy the Book Buy the eBook
We are a participant in the Amazon Services LLC Associates Program, an affiliate advertising program designed to provide a means for us to earn fees by linking to Amazon.com and affiliated sites.
Skip to the book review
Publisher Summary:

Giff Dixon doesn’t remember how he got to the town of Corazon. All he knows is that some cowboys found him way off the beaten path in Oklahoma cattle country, barely alive and carrying a belly full of buckshot. Now, he’s broke, friendless, and at the end of his rope.

Everything changes when, out of the blue, he’s offered a job guiding a government expedition to investigate reports of homesteaders being forced off their land by the all-powerful Torreon Cattle Company. It seems an easy enough ride until Grady Sebree, the iron-fisted boss of Torreon, approaches Dixon. Sebree has a proposition: Keep him informed of what the government men are up to, and get a prime job after the dust settles.

But Dixon isn’t the kind to betray the men who gave him a chance for redemption. And soon enough, he finds himself caught in a brutal range war he never wanted—and has no choice but to finish . . .

A winner of the Levi Strauss Golden Saddleman Award from the Western Writers of America, Luke Short was a master of the frontier epic. Play a Lone Hand is one of his most dramatic and engrossing tales.

Play a Lone Hand was an alright read. It was a typical western. I think it was a bit better than the other Luke Short book. I wanted a relief though, which was what I needed when I picked it up.