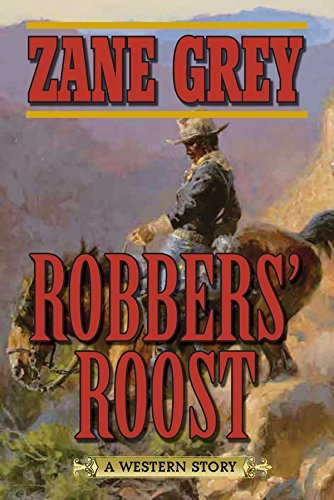 Author: Zane Grey
Genre(s): Fiction  General Fiction  Westerns
Buy the Book Buy the eBook
We are a participant in the Amazon Services LLC Associates Program, an affiliate advertising program designed to provide a means for us to earn fees by linking to Amazon.com and affiliated sites.
Skip to the book review
Publisher Summary:

“He was a young man in years, but he had the hard face and eagle eye of one matured in experience of that wild country. He bestrode a superb bay horse, dusty and travel-worn and a little lame. The rider was no light burden, judging from his height and wide shoulders; moreover, the saddle carried a canteen, a rifle, and a pack. From time to time he looked back over his shoulder at the magnificent long cliff wall, which resembled a row of colossal books with leaves partly open. It was the steady, watchful gaze of a man who had left events behind him.”

So begins Jim Wales’s story in Robbers’ Roost. While a battle rages between two outlaw gangs in a remote Utah canyon, Jim struggles to rescue Helen Herrick, who has been captured and held for ransom.

Robbers’ Roost tells the story of their personal struggle to escape the clutches of the murderous outlaws while simultaneously safeguarding their passion, one that is not likely to survive the beautiful, yet deadly, terrain and people of the old American West.

This was a good western. I liked Zane Grey’s main character in this one because he was complicated and full of different feelings. The story line was rather predictable, but good. I also liked the supporting characters and their unusual traits.