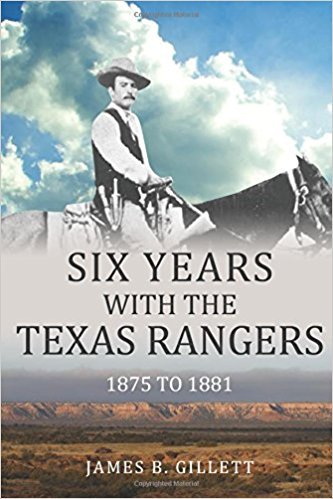 Book Review of
Six Years with the Texas Rangers

Author: James Gillet
Genre(s): American  Biographies & Memoirs  History  Memoirs  Nonfiction
Buy the Book Buy the eBook
We are a participant in the Amazon Services LLC Associates Program, an affiliate advertising program designed to provide a means for us to earn fees by linking to Amazon.com and affiliated sites.
Skip to the book review
Publisher Summary:

James Gillett joined the rangers in 1875 with the task of repressing domestic foes of this frontier region where banditry flourished and crimes of violence were committed with appalling frequency.

He joined Company D of the Texas Rangers at the age of just seventeen. For the next six years he would be combatting horse thieves and murderers, fighting in the Mason County War, capturing vigilantes and providing law and order for the towns.

He met and fought against some of the most infamous criminals of his day, from Sam Bass and his train robber gang to the Horrell Brothers and the outlaw Dick Dublin.

That is not to say that Gillett only fought against domestic criminals, he was frequently called to combat dangerous Native Americans, particularly the Apaches, who were raiding, threatening or stealing from Texan inhabitants.

At points the Rangers would even be drawn across the border into Mexico in order implement justice against those who had attempted to escape.

Six Years with the Texas Rangers is a fascinating account of one Ranger’s life attempting to maintain law and order on the Texan frontier.

Six Years with the Texas Rangers is a great book about Texas and the Texas Rangers after they were reorganized years after the Civil War. If you are a Texan or love Texan history, check this book out because it is well worth reading. I am sure that James Gillett may be exaggerating the truth in some sections of his memoir, but I did not really care because I was able to learn so much. It is also not that long of a book, but I would have still recommended it if had been three times as long.

Gillett did a good job of tell fun stories about his life with the Texas Rangers. It is a little choppy because he covers so much in a short period of time. I think that the characters, which were real people who Gillett knew were so much fun. This book is a great reminder that the Texas Rangers and the West were made up of people just like we know in our lives today.