Home » Book Reviews » Texas Ranger: The Epic Life of Frank Hamer
We are a participant in the Amazon Services LLC Associates Program, an affiliate advertising program designed to provide a means for us to earn fees by linking to Amazon.com and affiliated sites. 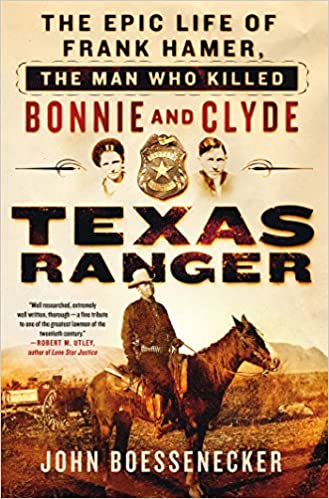 Author: John Boessenecker
Genre(s): Biographies  Biographies & Memoirs  History  Nonfiction
Buy the Book Buy the eBook
We are a participant in the Amazon Services LLC Associates Program, an affiliate advertising program designed to provide a means for us to earn fees by linking to Amazon.com and affiliated sites.
Skip to the book review
Publisher Summary:

“Frank Hamer, last of the old breed of Texas Rangers, has not fared well in history or popular culture. John Boessenecker now restores this incredible Ranger to his proper place alongside such fabled lawmen as Wyatt Earp and Eliot Ness. Here is a grand adventure story, told with grace and authority by a master historian of American law enforcement. Frank Hamer can rest easy as readers will finally learn the truth behind his amazing career, spanning the end of the Wild West through the bloody days of the gangsters.”
–Paul Andrew Hutton, author of The Apache Wars

To most Americans, Frank Hamer is known only as the “villain” of the 1967 film Bonnie and Clyde. Now, in Texas Ranger, historian John Boessenecker sets out to restore Hamer’s good name and prove that he was, in fact, a classic American hero.

From the horseback days of the Old West through the gangster days of the 1930s, Hamer stood on the frontlines of some of the most important and exciting periods in American history. He participated in the Bandit War of 1915, survived the climactic gunfight in the last blood feud of the Old West, battled the Mexican Revolution’s spillover across the border, protected African Americans from lynch mobs and the Ku Klux Klan, and ran down gangsters, bootleggers, and Communists. When at last his career came to an end, it was only when he ran up against another legendary Texan: Lyndon B. Johnson.

Written by one of the most acclaimed historians of the Old West, Texas Ranger is the first biography to tell the full story of this near-mythic lawman.

I picked up Texas Ranger: The Life of Frank Hamer the Man Who Killed Bonnie and Clyde because I did want to know more about Bonnie and Clyde and the man who took them down. So if you pick up this book with that intent you will be disappointed. There are only four chapters that cover Bonnie Clyde, and it is a massive book, so there is not much on them or Frank Hamer taking them down. The cool thing about that case though was it helped save the Texas Rangers from being disbanded because of the publicity. Just an interesting fact.

However, if you pick it up for a biography on Frank Hamer and to learn more about Texas in the late 1800s and early 1900s, you won’t be disappointed. After the first few chapters, I realized that it was not just on Bonnie and Clyde. I was a bit sad, but then I ended up gobbling up the history of Texas.

It was sad but also fascinating as the author talked a lot about racial issue and the criminal justice system. If you want to know more about Texas, this may be a good place to go because not only does it teach about a famous Texan, but about the state’s history both sad and good.