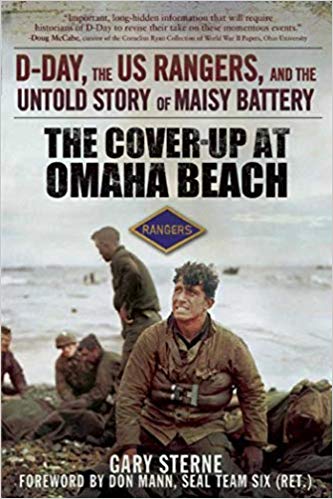 Book Review of
The Cover Up At Omaha Beach

Author: Gary Sterne
Genre(s): History  Nonfiction  WWII
Buy the Book Buy the eBook
We are a participant in the Amazon Services LLC Associates Program, an affiliate advertising program designed to provide a means for us to earn fees by linking to Amazon.com and affiliated sites.
Skip to the book review
Publisher Summary:

The Rangers’ mission was clear. They were to lead the assault on Omaha Beach and break out inland. Simultaneously, other Ranger units would scale the cliffs at Pointe du Hoc to destroy the ostensibly huge gun battery there and thus protect the invasion fleet from being targeted.

But was the Pointe du Hoc mission actually necessary? Why did the Allies plan and execute an attack on a gun battery that they knew in advance contained no field guns? And more importantly, why did they ignore the position at Maisy that did? Using personal interviews with the surviving Rangers who fought on the beach and at Pointe du Hoc, The Cover-Up at Omaha Beach presents exceptionally detailed new research that takes the reader into the middle of the action with the Rangers.

Gary Sterne has made a painstaking study of what the Allies actually knew in advance of D-Day, including what was known about Maisy Battery. Maps, orders, and assault plans have been found in American, British, and German archives, many of which have only recently been released after staying classified for more than sixty years. Radio communications of the Rangers as they advanced inland have been found, and Royal Air Force intelligence evaluations of bombing missions directed at the site have now been released. All of this combines to make The Cover-Up at Omaha Beach one of the most up-to-date references on the subject.

Skyhorse Publishing, as well as our Arcade imprint, are proud to publish a broad range of books for readers interested in history–books about World War II, the Third Reich, Hitler and his henchmen, the JFK assassination, conspiracies, the American Civil War, the American Revolution, gladiators, Vikings, ancient Rome, medieval times, the old West, and much more. While not every title we publish becomes a New York Times bestseller or a national bestseller, we are committed to books on subjects that are sometimes overlooked and to authors whose work might not otherwise find a home.

The Cover-Up at Omaha Beach was a neat book to read. I learned a lot and was able to read a ton of first hand accounts of D-day and the days that followed and then into the future. It showed how man bought the land where the Maisy Battery was, which lead him to write this book. He shows pictures, which was neat. It just cool book.

But, it was all over the place. Chaotic to a point. I had trouble staying in the book and wanting to keep reading. I had trouble tracking what was going and what I was supposed to know. It had a lot of facts and story, but it could have been written better.