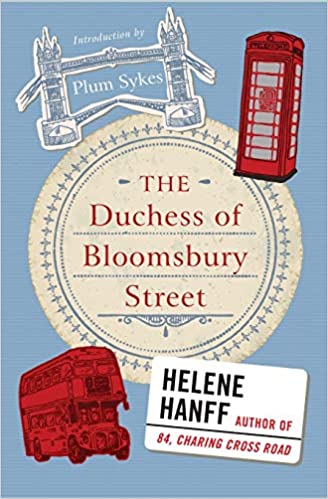 Book Review of
The Duchess of Bloomsbury Street

Author: Helene Hanff
Genre(s): Biographies & Memoirs  Nonfiction
Buy the Book Buy the eBook
We are a participant in the Amazon Services LLC Associates Program, an affiliate advertising program designed to provide a means for us to earn fees by linking to Amazon.com and affiliated sites.
Skip to the book review
Publisher Summary:

Nancy Mitford meets Nora Ephron in the pages of The Duchess of Bloomsbury Street, Helene Hanff’s delightful travelogue about her “bucket list” trip to London

When devoted Anglophile Helene Hanff is invited to London for the English publication of 84, Charing Cross Road—in which she shares two decades of correspondence with Frank Doel, a British bookseller who became a dear friend—she can hardly believe her luck. Frank is no longer alive, but his widow and daughter, along with enthusiastic British fans from all walks of life, embrace Helene as an honored guest. Eager hosts, including a famous actress and a retired colonel, sweep her up in a whirlwind of plays and dinners, trips to Harrod’s, and wild jaunts to their favorite corners of the countryside.

A New Yorker who isn’t afraid to speak her mind, Helene Hanff delivers an outsider’s funny yet fabulous portrait of idiosyncratic Britain at its best. And whether she is walking across the Oxford University courtyard where John Donne used to tread, visiting Windsor Castle, or telling a British barman how to make a real American martini, Helene always wears her heart on her sleeve. The Duchess of Bloomsbury Street is not only a witty account of two different worlds colliding but also a love letter to England and its literary heritage—and a celebration of the written word’s power to sustain us, transport us, and unite us.