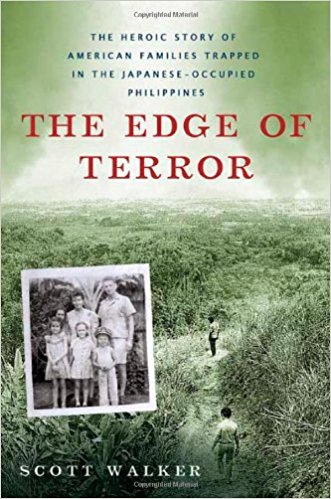 Book Review of
The Edge of Terror

Author: Scott Walker
Genre(s): Biographies  History  Nonfiction  WWII
Buy the Book Buy the eBook
We are a participant in the Amazon Services LLC Associates Program, an affiliate advertising program designed to provide a means for us to earn fees by linking to Amazon.com and affiliated sites.
Skip to the book review
Publisher Summary:

A gripping account of courage, death, and survival in the war-torn islands of the Philippines.

As Japanese military strategists planned their secret offensive against the United States in 1941, they designed a simultaneous two-pronged attack to wipe out American military might in the Pacific. While American battleships blew up and sank in Pearl Harbor, Japanese bombers approached the Philippines, soon destroying both American air and naval forces and leaving General Douglas MacArthur’s ground forces in disarray. As the shipping piers in Manila harbor burned, nearly six thousand American civilians were suddenly trapped in the islands for the duration of the war. There would be no more ocean liners or Pan Am Clippers to transport them to safety. These unfortunate individuals and families became the largest body of American citizens ever captured by an enemy army.

Soon most of these hapless civilians realized that they had little option but to surrender to the invading Japanese and be placed in squalid internment camps. However, on the small island of Panay, a group of American missionaries and gold miners bound their fates together and withdrew into hiding in the jungle. Some joined with the Filipino guerrilla forces, actively resisting the Japanese. Others quietly continued their humanitarian tasks amidst the horrors of war. But all of them experienced living hell together.

For the first time in more than fifty years, the little-known story is told of these brave American civilians on Panay. Drawing on diaries, memoirs, family interviews, and military archives, Scott Walker describes daily life during the occupation and the danger these Americans faced in their efforts to serve both God and country. Both a story of profound tragedy and miraculous escape, The Edge of Terror is one of the most intense and dramatic accounts to emerge from World War II.

On the Edge of Terror was one of the first adult/teen World War II stories I read. I have to give this book the credit for my love of Pacific World War II history. This book tells different stories of people who were in the Philippians during World War II. This book tells the story of people in concentration camps, survivors hiding in jungles, and men who didn’t surrender to the Japanese. I also found out about Guerilla Wife when I read this book. I definitely recommend this book to any interested in learning a little bit about many different lives.