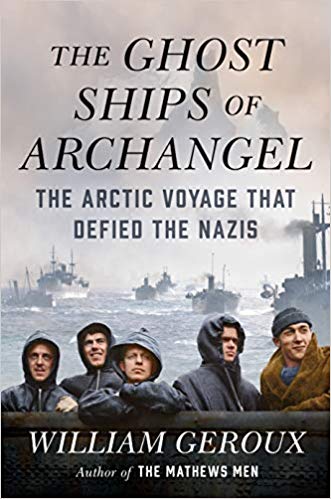 Book Review of
The Ghost Ships of Archangel

Author: William Geroux
Genre(s): History  Nonfiction  WWII
Buy the Book Buy the eBook
We are a participant in the Amazon Services LLC Associates Program, an affiliate advertising program designed to provide a means for us to earn fees by linking to Amazon.com and affiliated sites.
Skip to the book review
Publisher Summary:

On the fourth of July, 1942, four Allied ships traversing the Arctic separated from their decimated convoy to head further north into the ice field of the North Pole, seeking safety from Nazi bombers and U-boats in the perilous white maze of ice floes, growlers, and giant bergs. Despite the risks, they had a better chance of survival than the rest of Convoy PQ-17, a fleet of thirty-five cargo ships carrying $1 billion worth of war supplies to the Soviet port of Archangel–the limited help Roosevelt and Churchill extended to Soviet dictator Joseph Stalin to maintain their fragile alliance, even as they avoided joining the fight in Europe while the Eastern Front raged.

The high-level politics that put Convoy PQ-17 in the path of the Nazis were far from the minds of the diverse crews aboard their ships. U.S. Navy Ensign Howard Carraway, aboard the SS Troubadour, was a farm boy from South Carolina and one of the many Americans for whom the convoy was to be a first taste of war; aboard the SS Ironclad, Ensign William Carter of the U.S. Navy Reserve had passed up a chance at Harvard Business School to join the Navy Armed Guard; from the Royal Navy Reserve, Lt. Leo Gradwell was given command of the HMT Ayrshire, a fishing trawler that had been converted into an antisubmarine vessel. All the while, The Ghost Ships of Archangel turns its focus on Roosevelt, Churchill, and Stalin, playing diplomatic games that put their ships in peril.

The twenty-four-hour Arctic daylight in midsummer gave no respite from bombers, and the Germans wielded the terrifying battleship Tirpitz, nicknamed The Big Bad Wolf. Icebergs were as dangerous as Nazis. As a newly forged alliance was close to dissolving and the remnants of Convoy PQ-17 tried to slip through the Arctic in one piece, the fate of the world hung in the balance.

The Ghost Ships of Archangel was a neat book to read. I have read other books by William Geroux. I enjoyed this one, but I preferred his book about The Matthews Men. I thought that this was a interesting story that I had not heard about before. It was a little scattered for me to say I loved it, but overall it was great story. If you love the Navy side of World War II, you might really enjoy reading some of William Geroux’s writings.