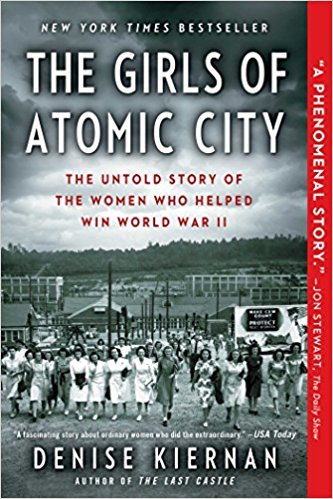 Book Review of
The Girls of Atomic City

Author: Denise Kiernan
Genre(s): American  Biographies & Memoirs  History  Nonfiction  WWII
Buy the Book Buy the eBook
We are a participant in the Amazon Services LLC Associates Program, an affiliate advertising program designed to provide a means for us to earn fees by linking to Amazon.com and affiliated sites.
Skip to the book review
Publisher Summary:

At the height of World War II, Oak Ridge, Tennessee, was home to 75,000 residents, and consumed more electricity than New York City, yet it was shrouded in such secrecy that it did not appear on any map. Thousands of civilians, many of them young women from small towns across the U.S., were recruited to this secret city, enticed by the promise of solid wages and war-ending work. What were they actually doing there? Very few knew. The purpose of this mysterious government project was kept a secret from the outside world and from the majority of the residents themselves. Some wondered why, despite the constant work and round-the-clock activity in this makeshift town, did no tangible product of any kind ever seem to leave its guarded gates? The women who kept this town running would find out at the end of the war, when Oak Ridge’s secret was revealed and changed the world forever.

Drawing from the voices and experiences of the women who lived and worked in Oak Ridge, The Girls of Atomic City rescues a remarkable, forgotten chapter of World War II from obscurity. Denise Kiernan captures the spirit of the times through these women: their pluck, their desire to contribute, and their enduring courage. “A phenomenal story,” and Publishers Weekly called it an “intimate and revealing glimpse into one of the most important scientific developments in history.”

The Girls of Atomic City was a very well written book. I enjoyed the stories and learning about some of what was going on in the States during World War II. I liked how I was able to connect, what I had already read about World War II, to this book. This book was writing more like a fiction book which made it so much easier to read. I felt that the flow of the book and the stories were what help connect the reader to this part of history.