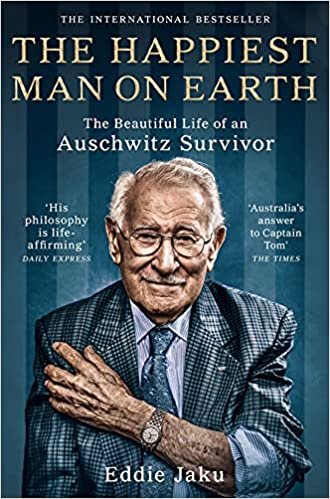 Book Review of
The Happiest Man on Earth

Author: Eddie Jaku
Genre(s): Biographies & Memoirs  Memoirs  Nonfiction  WWII
Buy the Book Buy the eBook
We are a participant in the Amazon Services LLC Associates Program, an affiliate advertising program designed to provide a means for us to earn fees by linking to Amazon.com and affiliated sites.
Skip to the book review

The Happiest Man on Earth by Eddie Jaku is a memoir of a survivor of Auschwitz.

Eddie Jaku was born in Leipzig, Germany, into a Jewish family, Eddie Jaku was a teenager when his life changed forever. On November 9, 1938, Eddie was beaten by the SS, arrested, and sent to a concentration camp with thousands of other Jews across Germany.

After reading the first paragraph of The Happiest Man on Earth by Eddie Jaku I was hooked.

“I have lived for a century, and I know what it is to stare evil in the face. I have seen the very worst in mankind, the horrors of the death camps, the Nazi efforts to exterminate my life, and the lives of all my people. But now I consider myself the happiest man on Earth.”

I recently saw a video online of a Christian influencer/blogger saying that we live in an incredibly difficult time to be a human. She went on to say how it is one of the most stressful times to be alive. My first thought was that she needs to read this book and other books like it. She needs to know her history.

The Happiest Man on Earth is not the best written book that I have read, but it is such a powerful book. English was not the author’s first language, but I didn’t mind that at all because Eddie’s story, and other stories like it, need to be told.

If you enjoy WWII books and memoirs Eddie’s story of surviving Auschwitz and what he survived before and after is well worth reading.