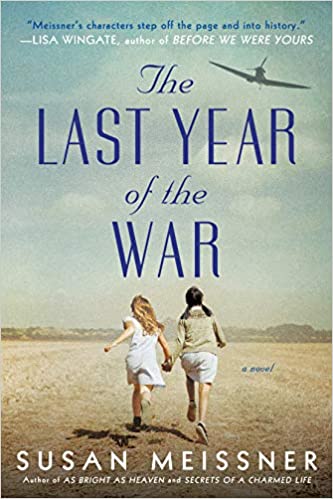 Book Review of
The Last Year of the War

Author: Susan Meissner
Genre(s): Fiction  Historical Fiction  WWII
Buy the Book Buy the eBook
We are a participant in the Amazon Services LLC Associates Program, an affiliate advertising program designed to provide a means for us to earn fees by linking to Amazon.com and affiliated sites.
Skip to the book review
Publisher Summary:

In 1943, Elise Sontag is a typical American teenager from Iowa—aware of the war but distanced from its reach. Then her father, a legal U.S. resident for nearly two decades, is suddenly arrested on suspicion of being a Nazi sympathizer. The family is sent to an internment camp in Texas, where, behind the armed guards and barbed wire, Elise feels stripped of everything beloved and familiar, including her own identity.

The only thing that makes the camp bearable is meeting fellow internee Mariko Inoue, a Japanese-American teen from Los Angeles, whose friendship empowers Elise to believe the life she knew before the war will again be hers. Together in the desert wilderness, Elise and Mariko hold tight the dream of being young American women with a future beyond the fences.

But when the Sontag family is exchanged for American prisoners behind enemy lines in Germany, Elise will face head-on the person the war desires to make of her. In that devastating crucible she must discover if she has the will to rise above prejudice and hatred and re-claim her own destiny, or disappear into the image others have cast upon her.

The Last Year of the War tells a little-known story of World War II with great resonance for our own times and challenges the very notion of who we are when who we’ve always been is called into question.

The Last Year of the War by Susan Meissner is the fifth or sixth book about Japanese internment camps during WWII that I have read this year. I have not read very much on this subject, and I am so interested in learning more about it.

I bought this ebook a while ago when it was on sale but didn’t read it until recently when several readers suggested it to me. If you are one of the readers, thank you! I loved this book.

An American born German girl and an American born Japanese girl become friends in an Internment Camp in Texas during WWII. Their lives are forever changed. This is a novel so the characters are not real, but the story is based on a real Internment Camp in Texas during WWII. The exact people may not have existed, but the events that this book covers did happen to many Americans during the war.

If you like historical fiction, especially WWII fiction, this is a great read!