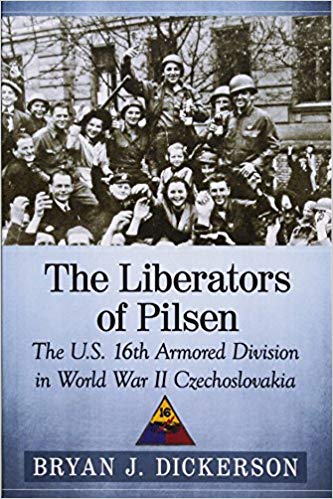 Book Review of
The Liberators of Pilsen

Author: Bryan J. Dickerson
Genre(s): History  Nonfiction  WWII
Buy the Book Buy the eBook
We are a participant in the Amazon Services LLC Associates Program, an affiliate advertising program designed to provide a means for us to earn fees by linking to Amazon.com and affiliated sites.
Skip to the book review
Publisher Summary:

Formed in July 1943 at Camp Chaffee, Arkansas, the 16th Armored Division was the last U.S. armored division to be activated in World War II, the last deployed to the European Theater and the last to see combat. As the war in Europe was coming to an end, General George S. Patton chose the division to spearhead a daring advance into Czechoslovakia. In its first and only combat operation, the 16th liberated the city of Pilsen, forever endearing itself to the Czech people. Poised to continue to the capital city of Prague, the division was halted not by German resistance but by political rivalries between the Western powers and the Soviet Union. Official U.S. Army records and veteran accounts tell the story of the units brief two-year existence and its successful mission.

The reason I bought and read The Liberators of Pilsen was because my great great uncle was one of the tank drives who helped liberate this Czechoslovakian town. I loved being able to see the facts behind some of the stories he has told me. I will say that this wasn’t the best written book, and it was kind of expensive for what it was, but it was worth me reading as I was able to connect some of my uncle’s stories together.

An example is that he has stories about guarding prisoners of war and the border between the USSR and the USA. I was able to see pictures and other comments about doing similar things that my own relative did.