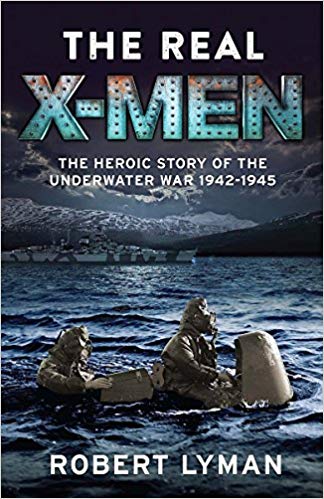 Book Review of
The Real X-Men

Author: Robert Lyman
Genre(s): History  Nonfiction  WWII
Buy the Book
We are a participant in the Amazon Services LLC Associates Program, an affiliate advertising program designed to provide a means for us to earn fees by linking to Amazon.com and affiliated sites.
Skip to the book review
Publisher Summary:

The thrilling and true story of the development and operational deployment of human torpedoes – ‘Chariots’ – and ‘X-craft’ midget submarines in British naval service during WWII, and of the extraordinary men who crewed these dangerous vessels. The commando frogmen who rode the Chariots and operated as divers from the X-craft were the forerunners of today’s Special Boat Service, the SBS.

Their aim was to attach an explosive charge underneath an enemy ship to destroy the vessel. Their hope was to return to their submarine unscathed. The Real X-Men tells the story of the sacrifice and heroism of the individual men, many of them little more than teenagers, who volunteered for this dangerous duty and who crewed both the Chariots and the X-craft without knowing the full extent of the risks entailed, nor indeed the very small chances they had of coming back alive.

I had never heard of mini submarines until I picked up The Real X-Men at a used bookstore. I had no idea that these small machines were used in World War II by Great Britain. I think if you love weird history this is right up your alley.

It was a very factual book and had a lot of diary and military records and recordings throughout, which did make it a little choppy from the authors tone. The facts were also sometimes scattered, so that was annoying, and I had to flip back a few times. But it was worth it as it went into men who were willing to be experimented on to find out how diving and stuff worked. I also found interesting as this book went into some of what Great Britain was doing in the Pacific, which I had not read a lot about.