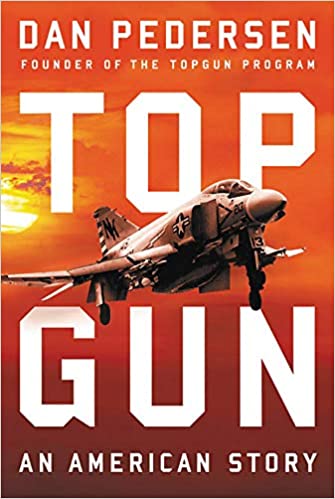 Author: Dan Pedersen
Genre(s): American  Biographies & Memoirs  History  Memoirs  Nonfiction  Vietnam
Buy the Book Buy the eBook
We are a participant in the Amazon Services LLC Associates Program, an affiliate advertising program designed to provide a means for us to earn fees by linking to Amazon.com and affiliated sites.
Skip to the book review
Publisher Summary:
On the 50th anniversary of the creation of the “Topgun” Navy Fighter School, its founder shares the remarkable inside story of how he and eight other risk-takers revolutionized the art of aerial combat.

When American fighter jets were being downed at an unprecedented rate during the Vietnam War, the U.S. Navy turned to a young lieutenant commander, Dan Pedersen, to figure out a way to reverse their dark fortune. On a shoestring budget and with little support, Pedersen picked eight of the finest pilots to help train a new generation to bend jets like the F-4 Phantom to their will and learn how to dogfight all over again.

What resulted was nothing short of a revolution — one that took young American pilots from the crucible of combat training in the California desert to the blistering skies of Vietnam, in the process raising America’s Navy combat kill ratio from two enemy planes downed for every American plane lost to more than 22 to 1. Topgun emerged not only as an icon of America’s military dominance immortalized by Hollywood but as a vital institution that would shape the nation’s military strategy for generations to come.

I wanted to read Top Gun by Dan Pedersen as soon as my dad brought it home from a bookstore. I was so glad he finally let me borrow it from his TBR pile to read over my break from school.

It definitely is not just about the program Topgun (it is spelled as one word in the Navy), but rather about the first officer in charge and help founded the program. It was an interesting memoir. I thought decently written. It showed what the life of a Navy pilot was like throughout the Vietnam war and before and after. It was a good read and did share about the Topgun program. Now I want to read a book about the program rather than just a memoir.