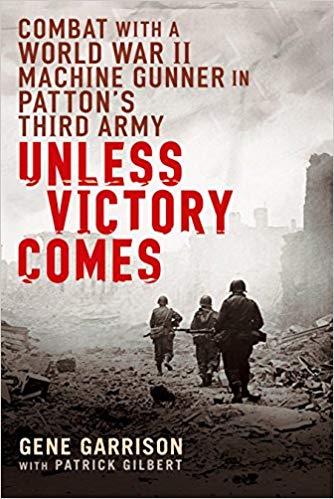 Book Review of
Unless Victory Comes

Author: Gene Garrison
Genre(s): Biographies & Memoirs  History  Memoirs  Nonfiction  WWII
Buy the Book
We are a participant in the Amazon Services LLC Associates Program, an affiliate advertising program designed to provide a means for us to earn fees by linking to Amazon.com and affiliated sites.
Skip to the book review
Publisher Summary:

On December 19, 1944, Gene Garrison turned nineteen. He spent his birthday in a muddy foxhole, listening to the cries of wounded comrades while exploding artillery shells sent shrapnel raining down on him and the enemy prepared to attack. It was his first day in combat.

Unless Victory Comes recounts Garrison’s journey as he was transformed from a fresh-faced kid from the farmlands of Ohio into a hardened soldier fighting for survival. From his baptism under fire, to the bitter fighting in the Battle of the Bulge, to the end of the war on the Czechoslovakian border, Gene Garrison witnessed the war from the ground up. This is the story of one young man, far from home, surrounded by strangers, facing death yet never losing hope that he would live to see his family again.

Unless Victory Comes was a good World War II memoir, and I am glad that I decided to pick it up at a used book store a while back. It had some funny and sad stories within its pages that made it different, yet also similar to other World War II stories.

Gene Garrison fought in Patton’s Third Army and had a war experience that stayed with him the rest of his life. This is personal story in how the war affect Garrison and less about how it affected other people. He saw a lot and was able to talk about in this book while keeping it flowing until the end. If you like World War II or any war story that is personal, then I would definitely recommend this book.