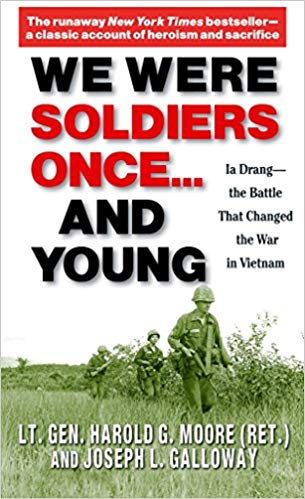 Book Review of
We Were Soldiers Once…And Young

Author: Harold Moore and Joseph Galloway
Genre(s): Biographies  Biographies & Memoirs  History  Nonfiction
Buy the Book Buy the eBook
We are a participant in the Amazon Services LLC Associates Program, an affiliate advertising program designed to provide a means for us to earn fees by linking to Amazon.com and affiliated sites.
Skip to the book review
Publisher Summary:

Each year, the Commandant of the U.S. Marine Corps selects one book that he believes is both relevant and timeless for reading by all Marines. The Commandant’s choice for 1993 was We Were Soldiers Once . . . and Young.

In November 1965, some 450 men of the 1st Battalion, 7th Cavalry, under the command of Lt. Col. Hal Moore, were dropped by helicopter into a small clearing in the Ia Drang Valley. They were immediately surrounded by 2,000 North Vietnamese soldiers. Three days later, only two and a half miles away, a sister battalion was chopped to pieces. Together, these actions at the landing zones X-Ray and Albany constituted one of the most savage and significant battles of the Vietnam War.

How these men persevered–sacrificed themselves for their comrades and never gave up–makes a vivid portrait of war at its most inspiring and devastating. General Moore and Joseph Galloway, the only journalist on the ground throughout the fighting, have interviewed hundreds of men who fought there, including the North Vietnamese commanders. This devastating account rises above the specific ordeal it chronicles to present a picture of men facing the ultimate challenge, dealing with it in ways they would have found unimaginable only a few hours earlier. It reveals to us, as rarely before, man’s most heroic and horrendous endeavor.

We Were Soldiers Once…And Young is a book a friend gave me because he was getting rid of it. I haven’t asked him yet if he read it, but I am wondering if he started it and then decided to give it up. I really liked it in the end because it taught me so much about the Vietnam War. I was able to see a bunch of different soldiers view points that gave me an idea of what was truly happening and how the war was effecting each man in a slightly different way. I think was a great book overall, but I did have some problems with it.

It was very choppy. I understand why the authors decided to write it this way, but it made it very difficult to read. This is actually one of those books where it might have been helpful to have a list of all of the men who were talking about the war in this book.

The choppiness was due to the authors writing in quotes of other people’s views of the war. I liked that they did this in the end, but while I was reading it, I had trouble keeping track of who was speaking. I often had to  go back and double and check to know if it was one of the authors talking or a soldier or if it was a different soldier from a few paragraphs ago. I did like this book, but I wouldn’t recommend it if you don’t love nonfiction or if you don’t know a lot about Vietnam.