Fact vs Fiction The Spymistress

It is no secret that we love nonfiction. We find the real story fascinating. But that doesn’t mean that we don’t enjoy a good fiction read as well.

A good historical fiction book leaves you wanting to know more. It gives you a longing to know the whole story or the real version.

Over the last few months I have read a couple of fiction books that have left me wanting for more, so I researched the nonfiction version of the same story.

Reading the nonfiction version gave me a better insight to the whole story. Instead of learning about fictitious people, I got to learn about the real people behind the story.

I now have a goal of reading more fiction and nonfiction book pairings. I want to learn the facts and read the fiction.

I thought it would be fun to occasionally share some of these book pairings with you.

Today I am starting with The Spy Mistress vs Liar, Temptress, Soldier, Spy.

Both of these books are ones that I read a few years ago. I guess my desire to read both the fact and the fiction has been strong for awhile. 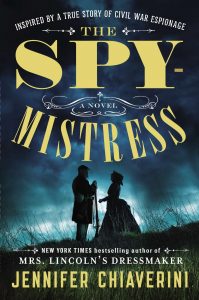 The Spy Mistress by Jennifer Chiaverini was published in 2013. It is a historical novel set during the Civil War. It is based on the life of Elizabeth Van Lew. During the Civil War she gained military intelligence, helped with the underground railroad, and more.

The author researched a famous historical figure and weaved a fictitious story into the well known facts.

Now for the nonfiction version of the story.

Liar, Temptress, Soldier, Spy covers the lives of four women who made a difference during the Civil War.

Belle Boyd became a spy for the Confederate army. Emma Edmonds disguised herself as a man to join the Union Army. Rose O’Neal used her influence to send information to Southern generals. And Elizabeth Van Lew orchestrated a spy ring and placed a former slave in the Confederate White House.

Elizabeth Ven Lew’s story is only part of the book Liar, Temptress, Soldier, Spy, but it gives you a good look into her real life and story.

Do you have a favorite fact vs fiction book pairing?