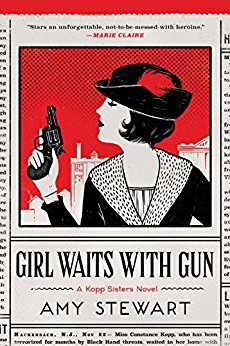 Author: Amy Stewart
Genre(s): Fiction  Historical Fiction
Buy the eBook
We are a participant in the Amazon Services LLC Associates Program, an affiliate advertising program designed to provide a means for us to earn fees by linking to Amazon.com and affiliated sites.
Skip to the book review
Publisher Summary:

Based on the Kopp sisters’ real-life adventures, the first three novels in best-selling author Amy Stewart’s sparkling series tell the riveting story of a woman who defied expectations, forged her own path, and tackled crime along the way.

In Girl Waits with Gun, we meet Constance Kopp. Constance doesn’t quite fit the mold. She towers over most men, has no interest in marriage or domestic affairs, and has been isolated from the world since a family secret sent her and her sisters into hiding fifteen years ago. One day a belligerent and powerful silk factory owner runs down their buggy, and a dispute over damages turns into a war of bricks, bullets, and threats as he unleashes his gang on their family farm. When the sheriff enlists her help in convicting the men, Constance is forced to confront her past and defend her family — and she does it in a way that few women of 1914 would have dared.

In Lady Cop Makes Trouble, Constance and her sisters aren’t living the quiet life anymore. After Sheriff Heath sees Constance in action, he appoints her as one of the nation’s first female deputies. But when a German-speaking con man threatens her position—and puts the honorable sheriff at risk for being thrown in his own jail—Constance will be forced to prove herself again.

In Miss Kopp’s Midnight Confessions, Constance has finally earned her deputy sheriff’s badge and is ready to tackle a new kind of case: defending independent young women brought into the Hackensack jail on dubious charges of waywardness, incorrigibility, and moral depravity. Such were the laws—and morals—of 1916. Constance uses her authority as deputy sheriff, and occasionally exceeds it, to investigate and support these women when no one else will. But it’s her sister Fleurette—who runs away from their sleepy farm to join the glamorous world of vaudeville—who puts Constance’s beliefs to the test.

Grace and I both love this series. This is a great way to get the first three books in the series. We have both read them and found them fun to read. For our full reviews of each book click on the titles below.