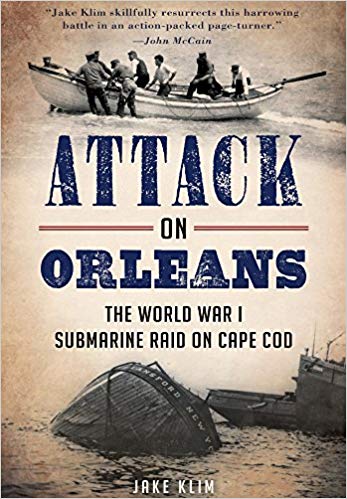 Book Review of
Attack on Orleans

Author: Jake Klim
Genre(s): History  Nonfiction  WWI
Buy the Book Buy the eBook
We are a participant in the Amazon Services LLC Associates Program, an affiliate advertising program designed to provide a means for us to earn fees by linking to Amazon.com and affiliated sites.
Skip to the book review
Publisher Summary:

On the morning of July 21, 1918–in the final year of the First World War–a new prototype of German submarine surfaced three miles off the coast of Cape Cod, Massachusetts. The vessel attacked an unarmed tugboat and its four barges. A handful of the shells fired by the U-boat’s deck guns struck Nauset Beach, giving the modest town of Orleans the distinction of being the only spot in the United States to receive enemy fire during the entire war. On land, lifesavers from the U.S. Coast Guard launched a surfboat under heavy enemy fire to save the sailors trapped aboard the tug and barges. In the air, seaplanes from the Chatham Naval Air Station dive-bombed the enemy raider with payloads of TNT. Author Jake Klim chronicles the attack from the first shell fired to the aftermath and celebrates the resilience of Orleans at war.

As you see the title of this book Attack on Orleans, you may be first thinking of New Orleans, but no this is about the attack Orleans, Massachusetts. Yes, in World War I, there was a submarine off the coast of New England.

And if you live in Orleans, you may already know this story and if you do, share your thoughts with us about what book is best to read about it.