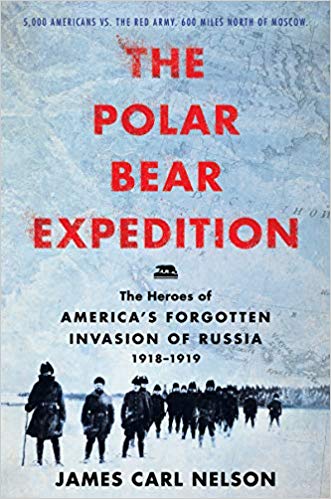 Author: James Carl Nelson
Genre(s): History  Nonfiction  WWI
Buy the Book Buy the eBook
We are a participant in the Amazon Services LLC Associates Program, an affiliate advertising program designed to provide a means for us to earn fees by linking to Amazon.com and affiliated sites.
Skip to the book review
Publisher Summary:

In the brutally cold winter of 1919, 5,000 Americans battled the Red Army 600 miles north of Moscow. We have forgotten. Russia has not.
An unforgettable human drama deep with contemporary resonance, award-winning historian James Carl Nelson’s The Polar Bear Expedition draws on an untapped trove of firsthand accounts to deliver a vivid, soldier’s-eye view of an extraordinary lost chapter of American history—the Invasion of Russia one hundred years ago during the last days of the Great War.

In the winter of 1919, 5,000 U.S. soldiers, nicknamed “The Polar Bears,” found themselves hundreds of miles north of Moscow in desperate, bloody combat against the newly formed Soviet Union’s Red Army. Temperatures plummeted to sixty below zero. Their guns and their flesh froze. The Bolsheviks, camouflaged in white, advanced in waves across the snow like ghosts.

The Polar Bears, hailing largely from Michigan, heroically waged a courageous campaign in the brutal, frigid subarctic of northern Russia for almost a year. And yet they are all but unknown today. Indeed, during the Cold War, two U.S. presidents, Ronald Reagan and Richard Nixon, would assert that the American and the Russian people had never directly fought each other. They were spectacularly wrong, and so too is the nation’s collective memory.

It began in August 1918, during the last months of the First World War: the U.S. Army’s 339th Infantry Regiment crossed the Arctic Circle; instead of the Western Front, these troops were sailing en route to Archangel, Russia, on the White Sea, to intervene in the Russian Civil War. The American Expeditionary Force, North Russia, had been sent to fight the Soviet Red Army and aid anti-Bolshevik forces in hopes of reopening the Eastern Front against Germany. And yet even after the Great War officially ended in November 1918, American troops continued to battle the Red Army and another, equally formiddable enemy, “General Winter,” which had destroyed Napoleon’s Grand Armee a century earlier and would do the same to Hitler’s once invincible Wehrmacht.

More than two hundred Polar Bears perished before their withdrawal in July 1919. But their story does not end there. Ten years after they left, a contingent of veterans returned to Russia to recover the remains of more than a hundred of their fallen brothers and lay them to rest in Michigan, where a monument honoring their service still stands.

In the century since, America has forgotten the Polar Bears’ harrowing campaign. Russia, notably, has not, and as Nelson reveals, the episode continues to color Russian attitudes toward the United States. At once epic and intimate, The Polar Bear Expedition masterfully recovers this remarkable tale at a time of new relevance.

If you love unknown pieces of history, The Polar Bear Expedition is probably right up your alley just like it was up mine.

I found it be so fascinating. I had no clue that the USA, Great Britain, and several other countries tried to invade Russia and help a group over throw the communist government. This book focus on the American men who went into Russia fighting for a war that was given up rather quickly making their families and friends wondering why they had lost relatives there. And also the men who fought and survived wondering why they wasted time in the cold land.

This story is kind of sad for that reason. It also encouraging though that the James Carl Nelson is making sure these lives are remembered. If you live in Michigan though, you may known about these men as there is a statue in their honor up there.