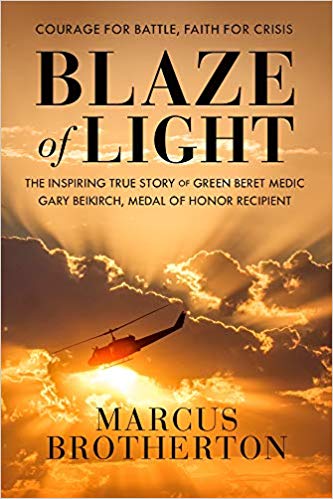 Book Review of
Blaze of Light

Author: Marcus Brotherton
Genre(s): Biographies & Memoirs  Christian Nonfiction  Nonfiction
Buy the Book Buy the eBook
We are a participant in the Amazon Services LLC Associates Program, an affiliate advertising program designed to provide a means for us to earn fees by linking to Amazon.com and affiliated sites.
Skip to the book review
Publisher Summary:

After dawn the siege began. It was April 1, 1970, and Army Green Beret medic Gary Beikirch knew the odds were stacked against their survival. Some 10,000 enemy soldiers sought to obliterate the twelve American Special Forces troops and 400 indigenous fighters who stood fast to defend 2,300 women and children inside the village of Dak Seang. For his valor and selflessness during the ruthless siege, Beikirch would be awarded a Medal of Honor, the nation’s highest and most prestigious military decoration.

But Gary returned home wounded in body, mind, and soul. To find himself again, Gary retreated to a cave in the mountains of New England, where a redemptive encounter with God allowed Gary to find peace.

New York Times best-selling author Marcus Brotherton chronicles the incredible true story of a person who changed from lost to found. Gripping and unforgettable, and written with a rich and vivid narrative voice, Blaze of Light will inspire you to answer hurt with ingenuity, to reach for faith, and to find clarity and peace within any season of storm.

Penguin Random House sent us Blaze of Light for free to review. I enjoyed being able to read this book. It is on Vietnam, so it is not a genre I read a lot on. I have read a few and found the war interesting, but not as much as I enjoy World War II at this point in my life. This was a good read for me.

It was a different perspective.

It is about a Green Beret Medic who went to Vietnam and ended up in Dak Seang where Montagnard, which was mountain tribe, were camped and being helped by 12 Green Berets. I had read very little on the people of Vietnam, and this culture.

It book showed about the culture of America from 50s to 70s leading up to the Vietnam War. There was actually only a part of the book on the war of Vietnam. It was more on the veteran Gary Beikirch life. It talked about how his childhood was not normal to how he suffered after the war. He was also injured in the war, and that effected him after the war.

He shared how God worked through all his events from almost dying as a toddler to mental problems as an adult. It is great to see Gary’s story. It was far from a perfect man. He had lots of faults, but he was willing to have them shown in this story. But with the grace of God, he has been changed and continues to change through being a better husband or a better friend.