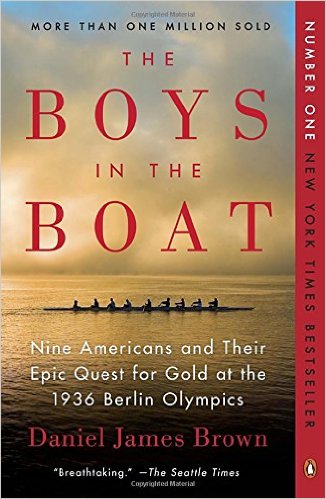 Book Review of
Boys In the Boat

Author: Daniel James Brown
Genre(s): American  History  Nonfiction
Buy the Book Buy the eBook
We are a participant in the Amazon Services LLC Associates Program, an affiliate advertising program designed to provide a means for us to earn fees by linking to Amazon.com and affiliated sites.
Skip to the book review
Publisher Summary:

For readers of Unbroken, out of the depths of the Depression comes an irresistible story about beating the odds and finding hope in the most desperate of times—the improbable, intimate account of how nine working-class boys from the American West showed the world at the 1936 Olympics in Berlin what true grit really meant.

It was an unlikely quest from the start. With a team composed of the sons of loggers, shipyard workers, and farmers, the University of Washington’s eight-oar crew team was never expected to defeat the elite teams of the East Coast and Great Britain, yet they did, going on to shock the world by defeating the German team rowing for Adolf Hitler. The emotional heart of the tale lies with Joe Rantz, a teenager without family or prospects, who rows not only to regain his shattered self-regard but also to find a real place for himself in the world. Drawing on the boys’ own journals and vivid memories of a once-in-a-lifetime shared dream, Brown has created an unforgettable portrait of an era, a celebration of a remarkable achievement, and a chronicle of one extraordinary young man’s personal quest.

My grandpa lent me this book to read because he thought I would really enjoy it and I definitely did. The Boys in the Boat focuses on how Joe Rantz and other boys over came the great Depression and rowed their boat to victory. This book spends a good section talking about Joe Rantz childhood and how he grew up during hard times on the West coast. I really enjoyed how the author fit in so many historical facts that were present during this time period. The book does have some language, but it is a very motivating book and creates a great respect for the children and teens who grew up during the Depression.