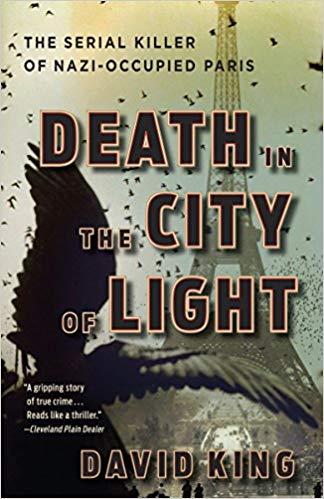 Book Review of
Death in the City of Light

Author: David King
Genre(s): History  Nonfiction  WWII
Buy the Book Buy the eBook
We are a participant in the Amazon Services LLC Associates Program, an affiliate advertising program designed to provide a means for us to earn fees by linking to Amazon.com and affiliated sites.
Skip to the book review
Publisher Summary:

As decapitated heads and dismembered body parts surfaced in the Seine, Commissaire Georges-Victor Massu, head of the Brigade Criminelle, was tasked with tracking down the elusive murderer in a twilight world of Gestapo, gangsters, resistance fighters, pimps, prostitutes, spies, and other shadowy figures of the Parisian underworld. But while trying to solve the many mysteries of the case, Massu would unravel a plot of unspeakable deviousness.

The main suspect, Dr. Marcel Petiot, was a handsome, charming physician with remarkable charisma. He was the “People’s Doctor,” known for his many acts of kindness and generosity, not least in providing free medical care for the poor. Petiot, however, would soon be charged with twenty-seven murders, though authorities suspected the total was considerably higher, perhaps even as many as 150.

Petiot’s trial quickly became a circus. Attempting to try all twenty-seven cases at once, the prosecution stumbled in its marathon cross-examinations, and Petiot, enjoying the spotlight, responded with astonishing ease. Soon, despite a team of prosecuting attorneys, dozens of witnesses, and over one ton of evidence, Petiot’s brilliance and wit threatened to win the day.

Drawing extensively on many new sources, including the massive, classified French police file on Dr. Petiot, Death in the City of Light is a brilliant evocation of Nazi-Occupied Paris and a harrowing exploration of murder, betrayal, and evil of staggering proportions.

I want to say first that I thought Death in the City of Light was very fascinating. It was a part of history that I never heard about probably because it is overshadowed by World War II. I think it is worth reading and knowing that serial killers are real and can be way more fascinating than fiction. Dr. Petiot has an interesting story that has a lot speculation in it because he didn’t tell people all of what he did or all the people he killed.

But I do want to say that I didn’t love this book because it was so dark. It is rather descriptive about the victims and how they were found. It was just a little too graphic for me when I read it. If I read it at different time, then maybe I would have loved it. But I think when I read it, I wanted something lighter and with a happy ending.

If you can’t handle graphic books, I wouldn’t recommend this too you. But if you don’t mind stories that are on the graphic side, you should probably check out reading this book. Also if you love thrillers, than try this real life story instead of reading fiction.