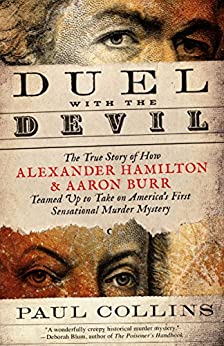 Book Review of
Duel with the Devil

Author: Paul Collins
Genre(s): American  History  Nonfiction
Buy the Book Buy the eBook
We are a participant in the Amazon Services LLC Associates Program, an affiliate advertising program designed to provide a means for us to earn fees by linking to Amazon.com and affiliated sites.
Skip to the book review
Publisher Summary:

In the closing days of 1799, the United States was still a young republic. Waging a fierce battle for its uncertain future were two political parties: the well-moneyed Federalists, led by Alexander Hamilton, and the populist Republicans, led by Aaron Burr. The two finest lawyers in New York, Burr and Hamilton were bitter rivals both in and out of the courtroom, and as the next election approached, their animosity reached a crescendo.

But everything changed when a young Quaker woman, Elma Sands, was found dead in Burr’s newly constructed Manhattan Well. The horrific crime quickly gripped the nation, and before long accusations settled on one of Elma’s suitors: a handsome young carpenter named Levi Weeks. As the enraged city demanded a noose be draped around his neck, Week’s only hope was to hire a legal dream team. And thus it was that New York’s most bitter political rivals and greatest attorneys did the unthinkable—they teamed up.

Our nation’s longest running cold case, Duel with the Devil delivers the first substantial break in the case in over 200 years. At once an absorbing legal thriller and an expertly crafted portrait of the United States in the time of the Founding Fathers, Duel with the Devil is a masterpiece of narrative nonfiction.

I knew some about this trial case that Alexander Hamilton and Arron Burr participated in, but I had not read it in the amount of detail Duel with the Devil covers.

It was a crime story that I enjoyed. There were a lot of details, the what ifs that are great and what the world knows happened for sure.

I really want to know who killed Elma.

It also was a reminder that people’s enjoyment of reading and seeing the trials of murders and crimes has not changed. It also showed that the trial system has always had faults. Like in Levi Week having issues after the trial outcome.

I did find it a bit of tedious read because there were so many facts. But if you love true crime or early American history, you may want to check out this book from your library.