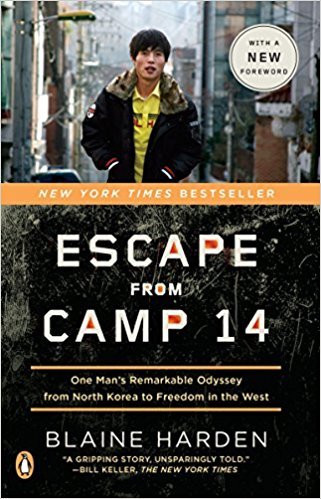 Book Review of
Escape From Camp 14

Author: Blaine Harden
Genre(s): Biographies  Biographies & Memoirs  Nonfiction
Buy the Book Buy the eBook
We are a participant in the Amazon Services LLC Associates Program, an affiliate advertising program designed to provide a means for us to earn fees by linking to Amazon.com and affiliated sites.
Skip to the book review
Publisher Summary:

North Korea’s political prison camps have existed twice as long as Stalin’s Soviet gulags and twelve times as long as the Nazi concentration camps. No one born and raised in these camps is known to have escaped. No one, that is, except Shin Dong-hyuk.

In Escape From Camp 14, Blaine Harden unlocks the secrets of the world’s most repressive totalitarian state through the story of Shin’s shocking imprisonment and his astounding getaway. Shin knew nothing of civilized existence—he saw his mother as a competitor for food, guards raised him to be a snitch, and he witnessed the execution of his mother and brother.

The late “Dear Leader” Kim Jong Il was recognized throughout the world, but his country remains sealed as his third son and chosen heir, Kim Jong Eun, consolidates power. Few foreigners are allowed in, and few North Koreans are able to leave. North Korea is hungry, bankrupt, and armed with nuclear weapons. It is also a human rights catastrophe. Between 150,000 and 200,000 people work as slaves in its political prison camps. These camps are clearly visible in satellite photographs, yet North Korea’s government denies they exist.

Harden’s harrowing narrative exposes this hidden dystopia, focusing on an extraordinary young man who came of age inside the highest security prison in the highest security state. Escape from Camp 14 offers an unequalled inside account of one of the world’s darkest nations. It is a tale of endurance and courage, survival and hope.

I found Escape from Camp 14 to be interesting, but not as good as I was hoping for it to be. Last year, I read an amazing story of a woman who left North Korea and finally made it to South Korea. I felt like that was a very inspirational book, but this one wasn’t as much.

I did like it in the end, but many of the details were unverifiable. The man, Shin, was known to lie, which made me wonder about everything he said. I prefer a reliable narrator.

This version at least had both stories. The originally tale he told people, and what he calls the true version. I will say that the author did as much research as he could, so most of the information is probably accurate making it a horrific story. I feel sorry for all that Shin went through and what he suffered. His story and others like it are important, but before you read this one, I think you should try A Thousand Miles to Freedom.