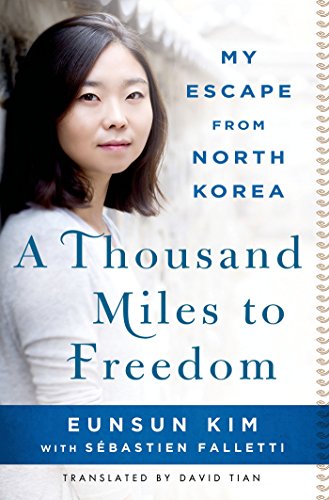 Book Review of
A Thousand Miles To Freedom

Author: Eunsun Kim
Genre(s): Biographies  Memoirs  Nonfiction
Buy the Book Buy the eBook
We are a participant in the Amazon Services LLC Associates Program, an affiliate advertising program designed to provide a means for us to earn fees by linking to Amazon.com and affiliated sites.
Skip to the book review
Publisher Summary:

Eunsun Kim was born in North Korea, one of the most secretive and oppressive countries in the modern world. As a child Eunsun loved her country…despite her school field trips to public executions, daily self-criticism sessions, and the increasing gnaw of hunger as the country-wide famine escalated.

By the time she was eleven years old, Eunsun’s father and grandparents had died of starvation, and Eunsun was in danger of the same. Finally, her mother decided to escape North Korea with Eunsun and her sister, not knowing that they were embarking on a journey that would take them nine long years to complete. Before finally reaching South Korea and freedom, Eunsun and her family would live homeless, fall into the hands of Chinese human traffickers, survive a North Korean labor camp, and cross the deserts of Mongolia on foot.

Now, Eunsun is sharing her remarkable story to give voice to the tens of millions of North Koreans still suffering in silence. Told with grace and courage, her memoir is a riveting exposé of North Korea’s totalitarian regime and, ultimately, a testament to the strength and resilience of the human spirit.

One of my girls gave me this book for Christmas because she knows I love reading biographies and that I appreciate lesser known biographies. This book was just that. This is not a well known book, but it was a great read. Very few people escape North Korea. Even fewer escape and then turn their story into a book. What I loved about this book, is that it gives you a look into North Korea that is rare. It is a story of modern day survival that you have probably never read or heard about. It shares a look into a something that very few of us know about. I have loaned this book out to many friends over the last year and everyone enjoyed it because they had never read anything like it before. It was that fascinating of a story. The one complaint I have on this book is that it was translated into English and I think the translation is lacking in some parts. I didn’t mind it as much as my grammar loving oldest daughter did. She enjoyed the book, but did not think it was the best translation job. I think you will enjoy this book, but just wanted to put that warning out there for those that might be bothered by the translation into English.