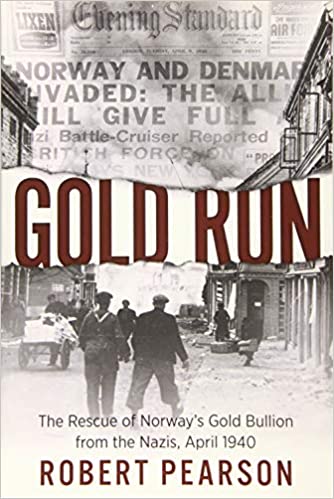 Author: Robert Pearson
Genre(s): History  Nonfiction  WWII
Buy the Book Buy the eBook
We are a participant in the Amazon Services LLC Associates Program, an affiliate advertising program designed to provide a means for us to earn fees by linking to Amazon.com and affiliated sites.
Skip to the book review
Publisher Summary:

Gold Run is the true story of arguably one of the greatest gold snatches in history. It is a tale of immense bravery, endurance and great leadership of loyal Norwegians, plus a little good fortune and help from the British against intrigue and overwhelming odds.

The German invasion of Norway on the night of April 8th/9th 1940 almost took Norway completely unawares; had it not been for the defiance of one small coastal battery, the Norwegian Royal Family, Government, and nearly 50 tons of gold bullion would have had no chance to escape. In desperate haste the Royal Family fled Oslo by rail, dodging bombs and strafing, eventually reaching the port of Molde which was subsequently devastated by fire bombing. The gold with extraordinary ingenuity was moved by road, rail and fishing boat, hotly pursued by the Germans. Its weight and the need for total secrecy created unique transportation problems. After several instances of near disaster, the Norwegians managed to get the gold to the coast where the Royal Navy came to the rescue. Such was the difficulty of extricating the bullion, it was not possible to load it in one cargo, and it was taken off in three Royal Navy Cruisers, HMS Enterprise, Galatea and Glasgow, from different locations. The ships were attacked in port, then constantly harassed and bombed by the Luftwaffe as they made their way back to the UK.

The loss of the bullion was a blow to the Germans. They had gained a country, but lost a King, a government and huge amount of bullion that would have financed their war machine. That loss is directly attributed to a visionary bank chief, a Colonel, a hastily assembled body of Norwegians and the ships and men of the Royal Navy, ever resourceful, brave and loyal to their respective countries. This is their story.

Gold Run by Robert Pearson brought to life a hidden story of how the Germans impacted Norway during WWII. It also shows the attitude towards the war and threat that shifted. Gold was another important aspect, which was the main story of this book.