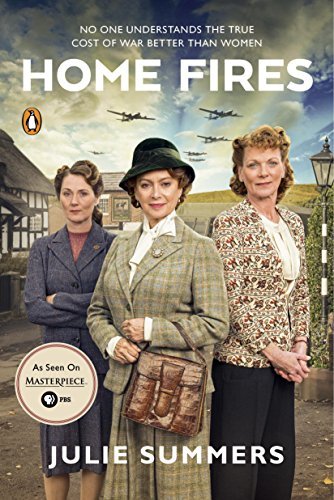 Author: Julie Summers
Genre(s): Biographies & Memoirs  History  Nonfiction  WWII
Buy the Book Buy the eBook
We are a participant in the Amazon Services LLC Associates Program, an affiliate advertising program designed to provide a means for us to earn fees by linking to Amazon.com and affiliated sites.
Skip to the book review
Publisher Summary:

Away from the frontlines of World War II, in towns and villages across Great Britain, ordinary women were playing a vital role in their country’s war effort. As members of the Women’s Institute, an organization with a presence in a third of Britain’s villages, they ran canteens and knitted garments for troops, collected tons of rosehips and other herbs to replace medicines that couldn’t be imported, and advised the government on issues ranging from evacuee housing to children’s health to postwar reconstruction. But they are best known for making jam: from produce they grew on every available scrap of land, they produced twelve million pounds of jam and preserves to feed a hungry nation.

Home Fires, Julie Summers’s fascinating social history of the Women’s Institute during the war (when its members included the future Queen Elizabeth II along with her mother and grandmother), provides the remarkable and inspiring true story behind the upcoming PBS Masterpiece series that will be sure to delight fans of Call the Midwife and Foyle’s War. Through archival material and interviews with current and former Women’s Institute members, Home Fires gives us an intimate look at life on the home front during World War II.

Home Fires by Julie Summers is the book that inspired the television series Home Fires. The book Home Fires was originally titled Jam Busters, but was republished with the title Home Fires.

Home Fires is the true story the Women’s Institute, also known as the WI, in Britain during WWII. It shares the story of the sacrifice that women had to make during the war. The WI is known for making jam during WWII, but they did so much more. They planted gardens, raised livestock, sewed clothes, mended clothes, wrote letters, and so much more.

The women who were left behind when their husbands and sons went to war found ways to support the war at home. The books shares how the women of the WI did that.

This book is a bit academic at points, but I didn’t mind that. It goes into a lot of detail about different aspects of the Women’s Institute that I found very interesting. It really makes  you appreciate modern times and conveniences. We take so much for granted.

I will say that the book is very different than the Home Fires T.V. show. The book definitely inspired the show, but the show doesn’t really follow the book. The show Home Fires takes that basic idea and turns it into a story of a specific town and the people in that town during WWII. I have watched part of the show and enjoyed it, but I liked the book better.