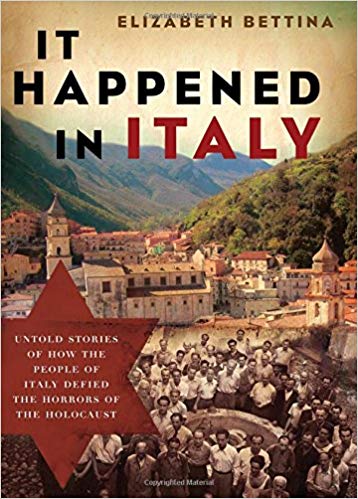 Book Review of
It Happened in Italy

Author: Elizabeth Bettina
Genre(s): History  Nonfiction  WWII
Buy the Book Buy the eBook
We are a participant in the Amazon Services LLC Associates Program, an affiliate advertising program designed to provide a means for us to earn fees by linking to Amazon.com and affiliated sites.
Skip to the book review
Publisher Summary:

Imagine Elizabeth Bettina’s surprise when she discovered that her grandmother’s village had a secret: over a half century ago, many of Campagna’s residents defied the Nazis and risked their lives to shelter and save hundreds of Jews during the Holocaust. What followed her discovery became an adventure as she uncovered fascinating untold stories of Jews in Italy during World War II and the many Italians who risked everything to save them.

When we think about Jewish prisoner of War camps, we 21st Americans think of Germany World War II, but that was not the only place Jews were held. There were prisoner of war camps in Italy. I was surprised to hear this, but the reason they are not as well known is because most Italians did not agree with Hitler. The only reason Jews were taken into camps and monitored was because the Italians were allies with Hitler.

Then Hitler wanted the Jews brought to his concentration camps. Then the Italians were brave and miraculous helped saved many Jews. You have to read this story or do some research about these Jews to find out what happens.

I did find this story to be a little slow and scatter, but that was because the author was trying to cover a lot and was using her journey of discovering this unique piece of history.