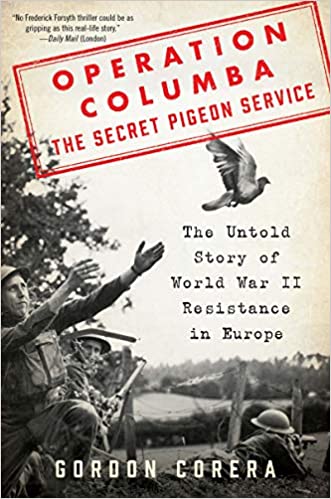 Author: Gordon Corera
Genre(s): History  Nonfiction  WWII
Buy the Book Buy the eBook
We are a participant in the Amazon Services LLC Associates Program, an affiliate advertising program designed to provide a means for us to earn fees by linking to Amazon.com and affiliated sites.
Skip to the book review
Publisher Summary:

Between 1941 and 1944, British intelligence dropped sixteen thousand homing pigeons in an arc across Nazi-occupied Europe, from Bordeaux, France to Copenhagen, Denmark, as part of a spy operation code-named Columba. Returning to MI14, the secret government branch in charge of the “Special Pigeon Service,” the birds carried messages that offered a glimpse of life under the Germans in rural France, Holland, and Belgium. Written on tiny pieces of rice paper tucked into canisters and tied to the birds’ legs, these messages were sometimes comic, often tragic, and occasionally invaluable—reporting details of German troop movements and fortifications, new Nazi weapons, radar systems, and even the deployment of the feared V-1 and V-2 rockets used to terrorize London.

The people who sent these messages were not trained spies. They were ordinary men and women willing to risk their lives in the name of freedom, including the “Leopold Vindictive” network—a small group of Belgian villagers led by an extraordinary priest named Joseph Raskin. The intelligence Raskin sent back by pigeon proved so valuable that it reached Churchill and MI6 parachuted agents behind enemy lines to assist him.

Gordon Corera uses declassified documents and extensive original research to tell the story of the Operation Columba and the Secret Pigeon Service for the first time. A powerful tale of wartime espionage, bitter rivalries, extraordinary courage, astonishing betrayal, harrowing tragedy, and a quirky, quarrelsome band of spy masters and their special mission, Operation Columba opens a fascinating new chapter in the annals of World War II. It is ultimately, the story of how, in one of the darkest and most dangerous times in history, under threat of death, people bravely chose to resist.

If you told me that I would be fascinated by Operation Columba a book about Pigeons, I would have looked at you very weirdly.

But when I started reading Operation Columba, I was totally captivated by the story of The Secret Pigeon Service. It tells of the history of pigeons from racing to delivering messages. It also incorporates the history and stories of the British secret service, the Underground resistance, and pigeon owners.

MI14 is probably not an MI section many have heard of, but that was where the pigeon service was for MI14 and pigeon’s services short life.

It is a little dry written, but I don’t really mind that. However, some others do so here’s your warning.

I enjoyed the story. I wanted to know more, so I may be reading more about pigeons or at least animals in war. The topic is just so fascinating and often hidden. I was glad that I read it. It is one of the interesting stories about something unique used against the enemy. The spying done by the Allies, then counter by the German’s to the pigeon service, and then counterintelligence of the pigeons is just so intriguing and odd from a modern eye.

It is just one of those bizarre pieces of history. It was a story that proved that real history is weird than fiction.